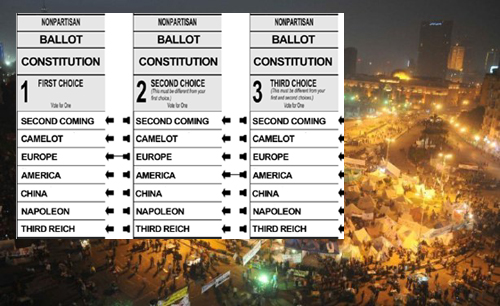 What if they don’t want “freedom”? What if they want a benevolent dictator operating in a framework of Sharia law? Is such liberty to be denied?

The Egyptian diaspora begins voting on a proposed constitution Saturday. A week later, those in Egypt will vote and within two weeks Egypt will likely have a new constitution.

The proposed constitution looks a lot like the old one under Mubarak with one notable difference: the elected president is limited to two 4-year terms.

The powerful role of the military, the judicial process, the suppression of women (tantamount by notably saying nothing about them and referring to citizen rights as the “right of men” and founding law on Sharia), the legislative process and internal geopolitical map are all carbon copies of the Mubarak years.

In addition to the limited terms of an elected president, the effective control that current president Mursi has on the military actually seems greater than Mubarak’s.

Amnesty International who I support strongly is livid. In their article published last week they described with vengeance case by case of Tahrir Square protestors injured by tear gas canisters dated March 2012 and sold to Egyptian police by Americans.

The article ends, “One thing is certain: the protesters will not accept a return to rule by decree, or accept a constitution written by a committee that doesn’t speak for them.“

Is the filibuster more important than one-man, one-vote? What if the protesters are not the majority?

I don’t want to get too philosophical, but we are at least breaching philological meanings of democracy and it strikes me as remarkably parallel to Harry Reid’s current conversations about Senate rules.

Amnesty, Human Rights Watch and other champions of human rights are unanimous that democracy is not as important as their own missions to protect basic human rights.

So that means that protecting basic human rights is more important than freedom, democracy or liberty, right? Do you ascribe to that?

I do: democracy is not always the best mechanism for achieving the most important goals of protecting human rights. And right now in Egypt, we have the greatest example I could ever have concocted to prove this.

Democracy brought both Hitler and Mussolini to power. It enshrined racism in America’s south for nearly a century. Democracy protected torture under Bush; it freed the thug Nixon; it allows even today Peronists to destroy Argentina.

And right now in front of our eyes democracy is crushing the marginal advances in human rights protections that Egypt has made the last generation.

Because that’s what the majority of Egyptians want. That’s the manifestation of democracy.

Yes. Because, we say with arrogant displeasure, they are either too dumb and uneducated, too coopted by an oppressed civilization, or too immoral to protect human rights.

No! say the protestors in Tahrir Square and herein lies a great test of democracy. The liberals who wish to protect human rights in Egypt as in the U.S. may be in the majority, but they have never coalesced into succeeding well in a democratic system.

Some argue, now, that the incredibly fractured Mursi opposition will coalesce, because if they don’t, they’ll be crushed.

In America a similar argument has proceeded throughout my life regarding the many different directions and movements that have continually had difficulty coalescing into the Democratic Party. Maybe America’s democracy is mature enough that it works for us, today, from time to time.

But in Egypt? I don’t think so. The same self-destructive motive that governs any older American to vote Republican and diminish his rights under Medicare and Social Security, or for any woman to vote to promulgate law to govern her pregnancy, is identical to the majority of Egyptians today who are equally self-destructive, willing to sacrifice their basic free will for something else.

It happens here, too.

Democracy is sloppy and as society moves into the instantaneous informational age that makes sneaky theory less long-lived, it may be out of date.

Human rights is more important than one-man, one-vote. Egypt does not seem to believe this. And so…

… are human rights so important that they should be protected from without? How far do we go and remain morally correct? Are we a global community first? Or do we dare to accept our brother’s immorality because there is something even more precious than human rights?

Self-determination. Because we are uncertain of the inviolability of our own morality? Because … we might be wrong?