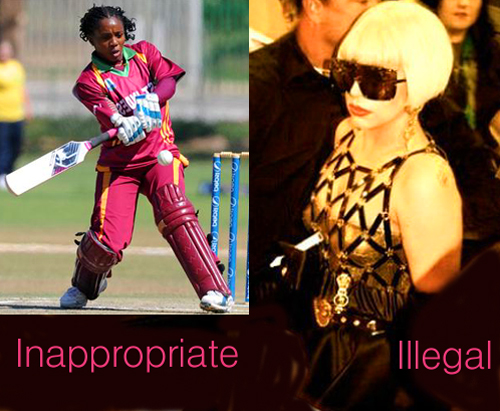 Africa is presenting some electric perspectives on western world hypocrisy, and I challenge anyone to explain it otherwise. Lady Gaga and cricket.

Lady Gaga’s presentation, lyrics (when there are some), causes and overall demeanor is basically that of an entertainer with a progressive set of political and social beliefs. She supported President Obama in the most recent election, is something of a humanist and a vociferous supporter of gay rights.

Her performances are downright eccentric if anarchic. I think it fair to say she’s a champion of free will.

But today in South Africa where’s she’s in the middle of a very popular performance tour, she’s getting entangled in her own beliefs in a way that would never occur in the western world.

Her concert’s ban on photographing any part of her performance may, indeed, be a violation of the new South African constitution. (As it should be, and as it should be everywhere at any time.)

The South African National Editors Forum has called on Gaga to “at least meet with us” to discuss her possible violation of the constitution, but she declined.

“Previous accepted practice at such events [as the Gaga concert] has been for accredited news photographers to be allowed to take pictures during the first three songs and then to withdraw,” SANEF continued. This time, though, Gaga says Nono.

It’s a long established practice, of course, in the west that concerts and other entertainer-centered performances be treated just like the Sunday NFL Game of the Week, a copyrighted and owned piece of intellectual property that includes virtually all images and graphics.

But the new South Africa, and from my point of view the only moral position, is that when an entertainer achieves “public domain,” then it’s a free-for-all. That’s defacto the situation, anyway. Not Gaga or Ted or Obama or Ricky Martin can keep pirated videos, photographs or sound tracks out of the public domain.

And there’s no way that journalists can report on this without referring to them.

Gaga is steeped in western hypocrisy.

And then there’s the first ever woman to head a national cricket board appointed Sunday in Kenya.

Jackie Janmohamed became one of the first cricket umpires licensed by the world cricket authority in 1989, and she’s been fighting for women in cricket ever since. Cricket is one of the most conservative of world sports, dominated almost exclusively by men.

Unlike press freedom at entertainer’s concerts, though, women in sports is much more accepted in the U.S. than in much of the rest of the western world. And we can specifically and clearly thank Title 9 for this, a series of federal laws passed in 1972.

But unlike Kenya on Sunday, America together with virtually all the rest of the western world limits the heads of governing sports institutions to the same gender of that institution. In other words, America has no Baseball Commissioner for both men and woman’s baseball … as Kenya now does for the even more conservative game of cricket.

“Unisex” in sports has come to Africa. But not to the west.

Lady Gaga and cricket. Just another day of Africa leaving the west behind in its (stadium) dust.