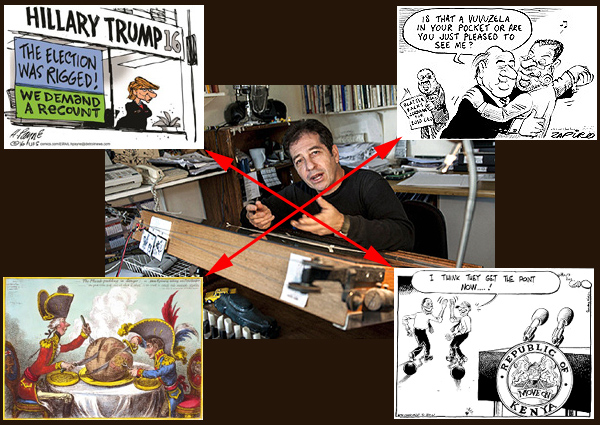 If you’ve got something to say, say it now.

The world is contracting into conservative populism and freedom of expression is in the gun site. Trump idly suggests shutting down the internet or incarceration for flag burning, and legislators in Kenya and South Africa kick gleefully into high gear.

Stalled legislation in both countries to curtail the press and freedom of speech is moving forward, again.

In Kenya the Cyber Security and Protection Bill was tabled in July with little hope of passage. Coincidentally or otherwise to the Trump phenomenon support for the bill has grown anew despite media opposition.

The current South African government still teeters on legitimacy because of the growing scandals of President Jacob Zuma. Yet it recently pushed for a “hate speech” law that if enacted would likely censor some of the country’s most famous commentators and cartoonists while pointedly making it a serious crime to “criticize the president.”

Zuma and clan are trying to fast track the legislation to avoid any more public comment. They obviously think the time is right.

Of course it isn’t just Africa. Zapiro (the critical South African cartoonist) has counterparts worldwide, for example in Malaysia where a reaction to Trumpism may result in greater Muslim protection including criminalizing speaking against it.

Fidel was the champion of press censorship, and a number of imperiled world leaders and businesses seem to be celebrating his grand memorials. In an about face as part of Facebook’s self-reactionary response to criticism it contributed to fake news, the behemoth has agreed to consider censorship in order to be allowed to function in China.

Here in America where it all seemed to come to a head with the Trump election, parts of our own society are now replicating what African dictators routinely encourage: extra-legal groups, clubs, militias that defy the law but aren’t prosecuted provided they prop up the regime:

The “Professor’s Watchlist” is an absolutely terrifying organization undoubtedly encouraged if not outright assisted by America’s new alt-right. This new form of McCarthyism demonstrates how quickly and how far America has sunk already.

My hope is with Africa. Somehow the struggle in America for what is obviously right seems more difficult. Although beset with much of the same populist ethos, African societies are still young and vigorous. Watch those particular battles in Kenya and South Africa for freedom of expression.

If they prevail, we might take our marching orders from them.