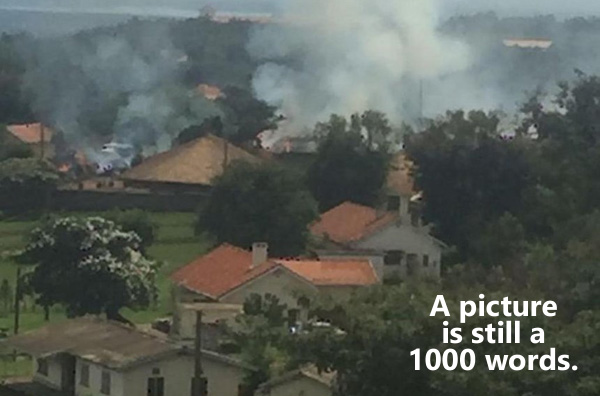 Anyone taking a picture is arrested or shot. Then, Facebook takes down the pictures of the courageous who manage to post the massacre. A Kenyan TV journalist is charged with “abetting terrorism” for taking … TV video.

And most noteworthy of all, the organizer of the massacre, self-imposed Ugandan president Yoweri Museveni poses for a “government picture” in sunny South Africa with its despised leader, Jacob Zuma. You can truly wonder in Trumpian vernacular, “What the f*#! is happening in the world today!”

Today is a world of impunity. Western Uganda is in clampdown with few people on the streets of its major cities. An eery calm surrounds the heavily geared police and army patrolling every intersection. Cell phones are a liability, because the authorities presume photos are being taken.

Many were. I posted yesterday the most provocative one distributed on Twitter by the leading opposition figure in Uganda, Kifefe Besigye, and it remains a precious post because Facebook is systematically taking down all such photos:

The mayor of Uganda’s capital, Kampala, posted a photo of the massacre yesterday and expressed disbelief in a Facebook post. It was taken down by Facebook and Mayor Erias Lukwago subsequently sent WorldBlogged:

“Good morning dear friends. Have woken up to a strange report on my Facebook account that they, Facebook Management, decided to remove a picture I shared on this timeline yesterday, showing dead bodies piled up at the entrance to Omusinga’s palace in Kasese. I take exception of that arbitrary and irrational decision because as a responsible citizen and leader I do reflect critically on whatever I publish on this platform. I abhor, detest and condemn violence, mayhem and crimes against humanity perpetrated by anyone and that was the sole purpose of that post, nothing else.”

It’s ironic that Facebook has not yet swept off my own reposted picture, despite more than 65,000 views at this writing and dozens of shares. It was the first and most provocative of them all, the one that Amnesty and Human Rights Watch likely used after being circulated by the Ugandan opposition leader. My post may simply be out of the algorithm’s geopolitical area.

But it shows how warped our times have become. Facebook may be diligently trying to atone for the debacle it helped create in America’s recent election, but its actions regarding this recent massacre in Uganda are nothing short of abhorrent.

Social media is the last bastion of human rights, and as such you’ve got to take the good with the bad. Especially in this case Facebook is effectively doing the dirty work of the authoritarian Ugandan government.

Suppression of photos continues today in even more subtle but effective ways. In 2014 the reputable Public Radio International decided that the only way to effectively portray the 1994 Rwandan genocide was to publish photos, which it did. But many of those were secured by Getty Image copyright. And so the post today is left with only empty white boxes where the pictures once were.

This is hardly the first time of oppressive state violence in western Uganda. The area has suffered multiple times during Museveni’s long and tortuous reign, but this may be the most widely publicized at the time … because of social media.

We’ll see if it matters. The “Pearl of Africa” is no more, for certain, but whether it can recover basic human dignity is now in the balance and the lens.