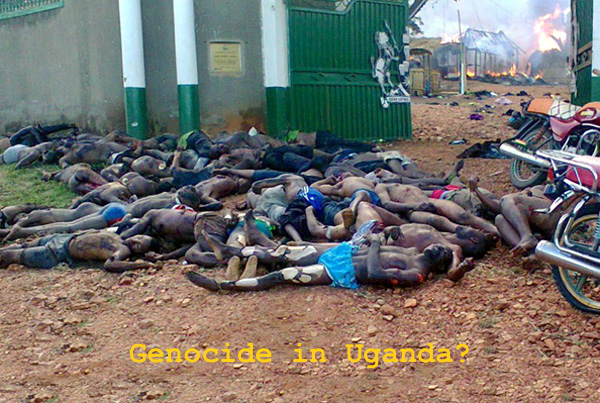 Major violence erupted in Uganda over the weekend. This morning the U.S. embassy warned travelers intending to visit the west of the country which includes its major tourist attractions.

The country’s major opposition leader, Kifefe Besigye, tweeted the photo shown above with the caption, “Genocide in Kasese.” News media have not confirmed it.

The worst violence in Uganda’s modern history follows the dictator’s self-installation Thursday for a fifth term as president, and then his implementation of several draconian laws including an anti-gay measure that some believe was withheld until Trump seemed securely in power.

Tourists have avoided Uganda for nearly a decade but the current situation seems to have the potential to go much further than just destroying its tourism.

The dictator, Yoweri Museveni, came to power in 1986 at a hopeful time following the end of the era of Idi Amin when a weak, tribalistic government installed by Tanzania fell in a coup. Several truly democratic elections followed and the 1990s looked extremely promising.

But like Mugabe in Zimbabwe, Museveni was unable to retain power through legitimate democracy so he grew increasingly and rapidly authoritarian. This was a time of serious war in The Congo next door, and western nations like the U.S. supported Museveni’s ability to stabilize his own turf.

During the 1990s and early 2000s, U.S. power brokers leveraged their support for Museveni by what at the time were very unusual assurances that Museveni would implement socially repressive policies that were failing in the U.S., including LGBT and voter suppression. That was partially successful and resulted in even more support from the U.S.

The Obama administration even provided unusual military support and assistance.

It was the old spiraling down cycle of entanglement that has doomed so much U.S. policy in Africa. So while inclinations to foment LGBT suppression have waned in the U.S., Museveni got entangled in his own past strengths in doing so. Now he is trying to secure his power by doubling down on them.

Obama called the law an “affront” to humanity, but according to Germany’s main international news service, the “new anti-gay bill [was signed] into law despite a torrent of international criticism. He wants to demonstrate his grip on power…”

The details of the country’s nascent rebellion center around a “kingdom” that Museveni tactfully recognized in 2009 during then wild protests in the streets of the capital, Kampala. He had repeatedly jailed and tortured opposition candidates and turned to ethnic politics to keep himself in power.

Uganda has the most ancient history of any equatorial African country. Its kingdoms were the foundation of early Lake Victoria societies and the most powerful, the Bagandan, was where much of African language originated. At Independence progressive local politicians tried to abolish the kingdoms to little avail. Idi Amin secured his power in part by recognizing the legitimacy of certain chiefs.

When Museveni came to power he reversed Amin’s policy and abolished the kingdoms. When his power was threatened in 2009, though, he reversed his reversal and once again started granting semi-autonomy to some of the kingdoms.

One of those, the Bakonzo, immediately installed a hereditary chief, Charles Wesley Mumbere, who was highly educated and part of the political opposition.

Several different spokesmen for the Ugandan Army confirmed to the New York Times that Mumbere had been “rescued” from his palace and placed in preventative detention. Journalists have not been allowed to speak with him.

Meanwhile portions of the Bakonzo royal guard have decamped to the nearby Ruwenzori mountains. This morning according to al-Jazeera fighting continues around the main city of Kasese.

Although I compared Museveni to Zimbabwe’s Mugabe, there are major differences between the politics of the two countries. Uganda’s opposition is much stronger and more organized than Zimbabwe’s. The situation, therefore, is considerably more volatile.