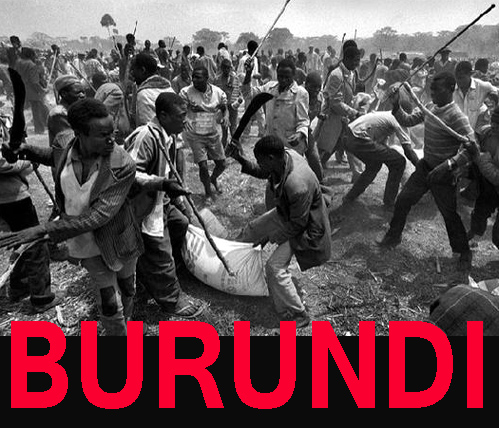 The conflict in Burundi, as previously in Rwanda, is ethnic, aggravated by horrific colonial rule and current western disinterest.

Unfortunately my position is more aligned with global right wingers than the left-leaning media, which argues forcefully that this is not an ethnic but a political conflict.

On the surface that’s obvious. The current president, Pierre Nkurunziza, was out of the country when a coup was staged by a demoted military officer, Godefroid Niyombare, and both are Hutus. Like Rwanda, 85% of the population is Hutu, 15% Tutsi.

Niyombare staged the coup after growing unrest in the capital that followed Nkurunziza’s announcement that he would seek a third term as president in upcoming elections.

The constitution restricts individuals to two terms as president. Nkurunziza contends his first term was not really a term, since he came to power on an agreement that ended a 13-year old violent conflict between Hutus and Tutsis. He argues that since only his second term was from an election, he should be given another election chance.

Niyombare was head of the intelligence service when Nkurunziza announced this, and he publicly opposed it. The president then sacked him.

So, yes, on the surface it seems like it’s Hutu against Hutu.

The UN announced several days ago that more than 50,000 refugees were fleeing Burundi: 25,004 to Rwanda, 17,696 to Tanzania and “almost 8,000″ to the South Kivu province in the Democratic Republic of the Congo.

Rwanda and Tanzania are considered friendly to Tutsi, and the DRC friendly to Hutu. Check the numbers. The easiest way to flee the country of Burundi is to cross over to the DRC. There are virtually no formalities on the northern route to Uvira, and more than half of the country’s western side is Lake Tanganyika, an easy crossing west to the DRC.

Why, then, so few refugees into the DRC? And so many into Rwanda and Tanzania?

The answer is obvious. Regardless of the political specifications at the surface of the current conflict, the population fears a genocide against Tutsis.

Burundi and Rwanda were originally a single colony of Germany before World War I. Like all the European colonial powers, Germany considered its mandate one of civilizing a primitive population of inferior people.

Africa colonization was aggressively driven by the private German, French, Belgian, and British businesses that were anxious to exploit the continent’s massive natural resources. European governments, however, were very reluctant to do so, but business required an ordered society and business prevailed over their weary governments.

Soon these four great European powers were competing with one another for more control and influence over the African continent, justifying the enormous cost to European electorates as a humanitarian one, creating civilization from barbarians. All the while European businesses were conducting some of the most unimaginable exploitation of people and resources.

This model for development required the colonizers to determine levels of “civilization.” European powers made public pronouncements of which ethnic groups showed more potential or initiative, and/or greater subservience to colonial oppression. In virtually all cases the local ethnic power was accepted in whatever state the European governments found it at the time colonization began.

In the Burundi/Rwanda area, the Tutsi while only 15% of the population were the most educated and most powerful. Tutsi ruled.

Following Germany’s defeat in World War I, the League of Nations divided its massive East African colony between Belgium and Britain.

Britain got what is now Tanzania, and Belgium got what is now Burundi and Rwanda. Belgium governed its area as a single colonial country, Ruandi-Urundi, and soon became the most notorious offender of human rights of the entire colonial period. Read Leopold’s Ghost.

For more than a millennium Hutus and Tutsis shared a single language and most life ways and traditions, and they intermarried frequently. But the Tutsis were always the overlords, and the Hutus were the workers and sometimes, slaves.

For centuries, some suggest two millennia, the minority Tutsi ruled the majority Hutus. More workers were needed than overlords, and whether by design or default as the centuries passed, the population of Hutus grew much faster than Tutsis.

By the time Belgium took over the area after World War I, there were between 5 and 6 times as many Hutu and Tutsi, even though the Tutsi ruled. Some claimed that over the centuries as Tutis numbers declined relative to Hutu, that the Tutsi felt they had to become more and more authoritarian.

Europe had to rebuild itself. There were no resources to continue colonization, despite the continued pressure by businesses to do so. Every colony was put on a fast track for independence.

The easiest way to do this was to further institutionalize the ethnic stratifications that had begun nearly a century before. Belgium decided the best thing to do was to create two countries and encourage the Tutsi to go to one (Burundi) and the Hutu to another (Rwanda).

Burundi was given to a Tutsi clan as a monarchy. In Rwanda, however, Belgium insisted on an election, and guess, what, the Hutus won. (The 1993 genocide changed that and Rwanda has been governed by a single Tutsi dictator ever since.)

But the division was unfair to begin with. Both countries are about the same size, yet the Tutsis were outnumbered by Hutus 5 – 6 to 1. Quite apart from the politics and attempted segregation, it’s not easy to get families and small businesses to leave homelands they’ve occupied for generations.

So essentially ever since independence the area has been in constant turmoil as the Hutu/Tutsi conflict only grows worse, not better. It was historical. It was reenforced and aggravated by colonial policies.

And Bill Clinton’s refusal to intervene and stop the 1993 Rwandan genocide before it was too late recreated the worst of this ethnic divide in the modern era.

I see no end to this ethnic divide. But if Barack Obama recommits the error of Bill Clinton should the situation in Burundi escalate, then once again we will reenforce racism, emasculating the politics that might otherwise be able to mitigate the intense hate.