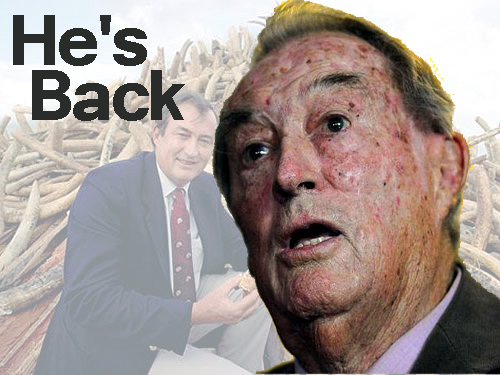 Richard Leakey is back. Not as the paleontologist. Not as the politician. As head of Kenya’s Wildlife Service. Window dressing at its finest!

Leakey is a very enigmatic character. I immediately disliked him during our first meeting in the late 80s when he was flying high as the architect and czar of the movement that was successfully stopping elephant poaching.

His accomplishments were many and a few years later he would demonstrate some exceptional personal courage when he was nearly assassinated while trying to develop a progressive political party in a country that at the time was being run by an iron-fisted dictator.

But he has had a lot of missteps in a variegated career that spanned science, wildlife administration and raw politics.

That’s his critical flaw: doing too many things, so doing nothing exceptionally.

The position is similar to the chairman of the board of a corporation, so technically Leakey is not supposed to be involved in the actual running of the now massive organization. Local observers, however, think he might have more proactive inclinations.

Nearly fifteen years ago London’s Guardian newspaper asked if “there is any more fight” left in Richard Leakey? Leakey was certainly in the nadir of his many careers then. He was never charismatic like his father, but his public persona had just taken a whipping when he mysteriously resigned from the head of a “dream team” America helped create in Kenya to battle corruption.

His health is reported even worse than when I last met him at the Field Museum in Chicago on the anniversary of his father’s 100th birthday in 2003. Then, he seemed hardly able to talk.

I think Kenyatta appointed Leakey, so soon after a stream of American celebs including Kerry and Clinton visited Kenya, to reconnect with America and the west. Leakey, and his father Louis, are adored in western circles where they had extraordinary success fund raising.

Kenya is in a bit of a slump right now. The vicissitudes of Americans not understanding the ebola situation, the recession in Europe from which the bulk of Kenyan tourists have always come, and the lingering worries about terrorism following the country’s invasion of Somali four years ago have all combined to really challenge an otherwise dynamic economy.

Kenya Airways, which I think is one of the finest if not the finest airline in Africa, came under government scrutiny today for losing more than $100 million dollars last year at a time when most global airlines were making tons of cash.

Relying more and more on outside foreign aid, particularly because of the Somali invasion, Kenya’s internal engines are sputtering and Kenyatta recognizes that only foreign investment will reverse this.

IBM, for example, has yet to fully fund a major Kenyan investment that it announced in 2012.

In my opinion none of this heralds any real crisis but simply demonstrates how susceptible a young emerging nation is to western fears.

“Poaching” is a topic that still commands American attentions. Africans understand much better than westerners that there really isn’t an elephant poaching crisis right now. But westerner’s insatiable need for crisis has narrated a different story, and Leakey is still known as the pivotal character that stopped the real elephant poaching of the 1980s.

Savvy President Kenyatta understands he has to now stroke American psyches. Appointing Leakey is part of this strategy.