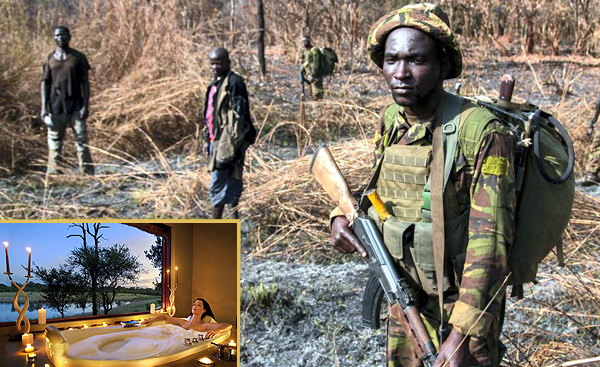 A 19-year old who beheads an older man, then freely confesses to having done so, strikes me as less evil than desperate or dangerously manipulable. It’s a sign of our times.

The situation happened last week in Tanzania’s Tarangire national park, not far from the upmarket Swala camp. The area is at the edge of the park immediately outside of which is an agricultural village suffering climate change challenges. The boy was in a poaching gang and the village elder he beheaded allegedly had reported him to game rangers.

I’m grossly speculating on the kid’s nature but I’d like to weave you my presumed scenario of the incident, nonetheless. It could be that the kid and his gang were simply evil renegades, but what I know of the area suggests a plausible alternative explanation.

The national parks of much of Africa are doing pretty well. While it’s true that incessant conservation education locally has raised African’s sensitivity to the importance of conserving the wild, and while it’s incontrovertible that an average African has a much greater respect for the wild than say an average American tourist, the main reason African national parks are doing well is because of the revenue they render from rich foreign tourists.

The contrast between the rich foreign tourist and the average villager is stark. The effective annual income of a villager in Babati where the boy lived is probably around $4-500/year.

The published cost at the upmarket camp near the village is $550 per person per night. February is the low season. In the high season starting in June the cost is $975 per person per night. A couple spending several nights at the camp in the high season transfers what amounts to the entire income of a Babati villager for 8 years to a company owned by Americans and South Africans.

(Recently the Tanzanian government increased the taxes on these transfers and more aggressively began to enforce their collection. This has successfully increased Tanzania’s portion of tourism revenues. Probably not more than 8-12% of total transfers.)

Farmers in the area grow mostly several types of grain, sweet potatoes and watermelons. Watermelons and tubers are a favorite of elephants. Tarangire is the best elephant park in Africa and its concentration of elephants is becoming too high.

I’ve myself watched a single farmer try to chase an elephant off his crops with a large stick. Elephant damage and destruction, much less human deaths, are not well reported in Tanzania.

The fragile balance between tourists, the wild, and local developing villages is as you can see ridiculously precarious. It holds because the villagers have determined their benefit from the arrangement is better than were there no arrangement, and they recognize that their government has had some success recently in wresting a slightly greater piece of the pie for them.

Moreover, the fancy tourist camps have increasing alliances with these villages, building them schools, paying for school fees and sometimes even providing relatively large loans or grants for various projects.

But no matter how you crunch the numbers, the villagers’ piece of the pie is still awfully thin.

The larger pieces of the pie go to … well, where do they go to?

When you consider how explosive the issue of income inequality is with us in the U.S. – how angry teachers and truck drivers and nurses have become, people who earn 100 times more than the Babati villager – you might understand how the finally ossifying mind of a young Tanzanian snaps.

Snapping is unnatural. It’s inhuman. Humans have survived earth’s trials and tribulations because they worked as a species together to prevail. If that assibya is lost beheading each other, so vanishes the species.