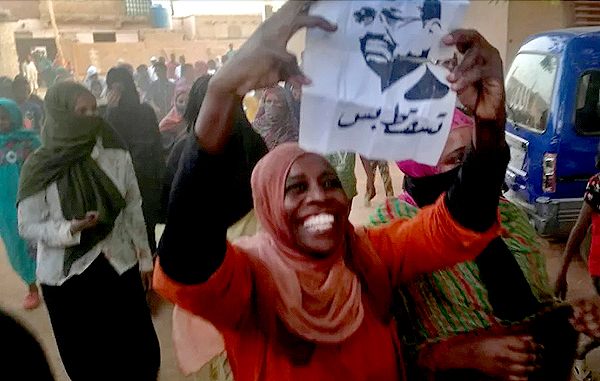 Facebook’s under a lot of negative scrutiny right now, but organized by Sudanese women it may be the weapon which finally ousts the current Sudanese dictator, Omar al-Bashir.

Sudanese protests which first began on December 19 persist and have begun to grow. Journalism is difficult in the country, but most news sources put the current deaths of protestors at 57. Sunday was a specially brutal day in the capital, Khartoum, with tear gas covering the city.

For more than a month the country has endeared a complete media blackout, with all social media blocked by the State.

But the internet hasn’t actually been turned off, because that would strangle the government itself. And wide knowledge of VPN (Virtual Private Networks) have allowed hundreds of thousands of Sudanese to actually work round the government’s actions.

And in the last few weeks a remarkable twist in some of these VPNs has really set the protests on fire.

Sudanese women are among the most restricted on earth. They cannot appear in public without considerable covering specifically prescribed by the government and they can’t gather in groups of more than 2 at the same time.

Punishment for the slightest infraction is usually stoning or lashing.

For a number of years Sudanese women have been using a number of Facebook pages through VPNs as a way of interacting with one another. Until this protest it had been almost exclusively for one woman to vet a man that she had been wedded to, or expected to be.

The amount of intel that flowed into these Facebook pages was astounding! When anything untoward were discovered about the man, the intel was leaked appropriately, the man’s family was shamed, the man was effectively doxed and in most cases removed as a threat from the woman’s life.

That in itself is absolutely remarkable in one of the most closed, strict Muslim societies on earth.

Everyone knew about the “Fangirls” and over time respected them enormously. But it came as a surprise to everyone when Fangirls’ mission expanded unexpectedly.

In the last few weeks women have begun using their Fangirl Facebook pages to dox security forces involved in brutality during the protests against al-Bashir.

“The Facebook groups have come to be known by Sudanese people — inside the country and throughout the diaspora — as the unofficial intelligence apparatus of Sudan,” Buzzfeed reported this weekend, “and have earned such notoriety that security agents have started hiding their faces in public for fear of appearing in one of the groups.

“No one ever thought that we could make change as women, but we are more powerful than any government,” Enas Suliman, a 26-year-old teacher told Buzzfeed. Ms. Suliman has been protesting since the start, she lives in Khartoum and is taking grave risks speaking out.

Male protestors have begun adding photos and their own intel onto the Facebook pages, although mostly anonymously. That may change as the protests grow stronger.

When a security person is doxed their lives are upended. Their homes are ransacked, their wives and children often leave them and as different Fangirl groups continue searching for more intel, all sorts of unwanted aspects of their pasts get revealed.

According to Buzzfeed the security forces have been seriously rattled by the new Fangirl mission. New recruits are down despite the attractive pay and benefits.

This would not have happened without Facebook and WhatsAp.

“The military and police would get away with so much, and no one would know anything about them,” Akasha, a teacher told Buzzfeed. “Fangirls came to the rescue.”