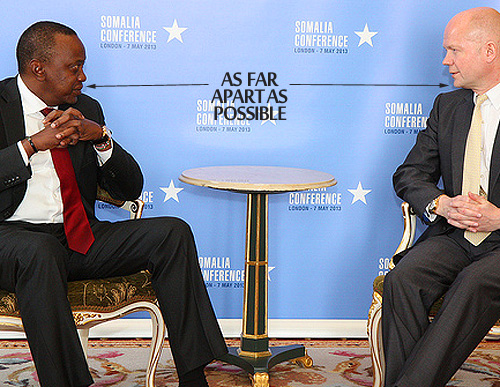 Yes I’m again guiding safaris in Kenya. There is peace and safety throughout the country, again, the best in five years. This does not mean I like the government.

EWT will broker safaris in Kenya, again, for the same reason EWT sent tourists to China and Ethiopia in the 1980s and to South Africa throughout the apartheid era: individuals need to see for themselves, and because those places at those times were safe for tourists.

As Kenya is, again. As Rwanda is, today. But just because it might be safe doesn’t mean I condone the evil and undemocratic policies of the government.

This is not just my assessment, of course. As each day passes, there is more condemnation of Kenyatta and Ruto, most of it from within Kenya.

Over the weekend it became clear that that the Uhruto Mafia might actually weasel out of their trials as still another important witness dropped out of the case. This has infuriated the educated Kenyan public.

Twisting the good things of the new constitution onto themselves, Kenyatta has managed to stymie opposition in Parliament. He’s done this by stepping outside civil society and the majesty of his own constitution, and essentially bribing easily coerced members of the opposition.

This is not Lincoln trading a post office to free slaves. It’s Uhuru Kenyatta dolling out money and fancy cars from the national treasury to support appointing his cronies to the most important watchdog committees of Parliament.

And following the lead of Ages Past, a recent High Court judge just stopped the prosecution of Kenya’s biggest financial scandal in its history, with the blessing of Kenyatta.

But such overt actions, skirting the boundaries of legality, are not as disconcerting as the extra-legal ones.

“Recent public pronouncements … suggest that the Uhuru administration might at some point resort to a Russia-style crackdown to silence critical voices,” claimed one of Kenya’s most acclaimed columnists this weekend.

Mr. Otieno explained that the organizations currently being harassed by public institutions on a much more grievous scale than our Right Wingers were called out by the IRS are universally ones that challenged Kenyatta’s election victory in the courts.

Kenyatta is feeling deep embarrassment on the global arena, as world leaders shun him and he becomes increasingly isolated. His problem, of course, is that he’s been indicted for crimes against humanity by the world community, and is due to be tried on July 9 in The Hague.

Cornered beasts tend to lash out, and that remains my worry. I worry that the current Kenyan regime – although I admire them for having established a palpable peace in society for the first time in nearly six years – will become so isolated that violence will return.

If it does, we’ll go away, again. If it doesn’t, I invite you to enjoy the beauty and promise of Kenya, which does not include its current government leadership.