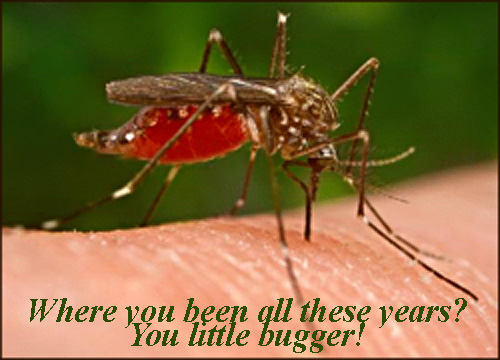 For the first time in 40 years, an outbreak of yellow fever has been reported in East Africa, far from any tourist area. Until now tourists’ yellow fever inoculations were political!

That’s right. One of the great irritants of traveling to East Africa in the last 40 years has been the necessity of getting a yellow fever inoculation, when no yellow fever disease was known to exist in East Africa.

The shot is pretty benign for most people and lasts ten years, but it’s expensive. And that’s because, well, there aren’t many areas in the world where yellow fever is a real risk. So the vaccine is rather rare.

The yellow fever hullabaloo in East Africa began in the late 1960s when an outbreak was reported near Kilimanjaro shortly after Tanganyika and Zanzibar federated into the new Tanzania. Unlike malaria, which is a much more complicated mosquito-born disease, yellow fever is a pretty simple virus carried in the blood of day-flying (rather than malaria night-flying) mosquitoes.

Still itching from their loss of autonomy, Zanzibaris began requiring proof of a yellow fever vaccination for all persons arriving in the country, even from mainland Tanzania of which they were now supposedly a part.

It didn’t matter that the bit of the 1960s outbreak was far, far from Zanzibar. If you didn’t have an inoculation, you had two choices: leave, or let a local official jab you. In those days, neither local officials or jabs were very antiseptic.

Zanzibar has some beautiful beaches, and as the island opened to tourism in the 1980s, a number of safari travelers would end or begin their trip in Zanzibar. Irritated by Zanzibari insistence on having a yellow fever vaccination (decades after the little outbreak was suppressed) mainland Tanzania began requiring the shot. I guess the theory was, if you can’t beat ‘em, join ‘em.

That irritated Kenya. So Kenya, too, started requiring the shot.

From time to time saner minds prevailed, and Kenya and Tanzania dropped the requirement. But they seemed to be dancing separate tunes, and whenever one required it, there was a bit of delay, then the other one did.

Soon fearful that there really was yellow fever, all sorts of countries in southern Africa began requiring the shot if you came from East Africa. Even South Africa! Where the first heart transplant was performed!

(In fairness to South Africa, they figured correctly that if East Africans required the shot, they must have the disease.)

And this little game continues right up to today.

Yes, dear traveler, you need that yellow fever inoculation, because even if right now no one requires it for entry, they might when you actually travel.

And it doesn’t matter a hoot that your chances of contracting yellow fever are less as a tourist in sub-Saharan Africa today than getting meningitis or (amazingly) Rift Valley Fever if you live in the Midwest.