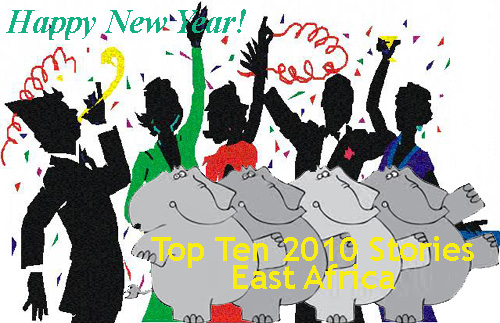 East Africa is booming, so many of the stories of 2010 were terrifically good news. But there were the tragedies as well like the Kampala bombings. Below I try to put the year in perspective with my top ten stories for East Africa for 2010.

#1: POPULACE DEMOCRACY GROWS
Theoretically, all the East African countries have operated as “democracies” except for the torrential years of Idi Amin in Uganda. But the quality of this democracy was never very good. 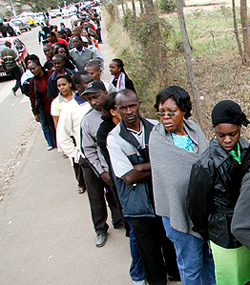 Tanzania was a one-party state for its first 20 years, and that same party continues to rule although more democratically today. Kenya, Uganda, Rwanda and Burundi experienced one dictator after another, even while democratic elections at regional levels challenged the executive.

But the end of the Cold War destroyed the alliances these developing countries had with super powers. Purse strings were cut, and political cow-towing ended. All of them moved towards a truly more democratic culture.

And in 2010 huge leaps were made in all the countries towards more truly representative government. The most important example by far was the overwhelming passing of the new constitution in Kenya in a national referendum where more than 75% of registered voters participated.

And like the U.S. election which followed shortly thereafter, and like support for national health care in the U.S. and so many other issues (like no tax cuts for the rich), Kenyan politicians dragged their feet right up to the critical moment. They tried and tried, and ultimately failed, to dissuade Kenyans from their fundamental desire to eliminate tribalism in government and more fairly distribute the huge wealth being newly created.

I see this as People vs. Politicians, and in this wonderful case, the People won!

And there was some progress as well in Tanzania’s December election, with the opposition growing and its influence today moving that country towards a more democratic constitution.

(It was not so good in Rwanda or Uganda, where stiff-arm techniques and government manipulation of the electoral process undermined any attempt at real democracy.) But the huge leap forward in Kenya, and the little hop in Tanzania, made this the absolute top story of the year.

#2: TERRORISM GROWS
Four smaller bombings in Nairobi’s central business district over the year were eclipsed by two horrible simultaneous bombings in Kampala bars on July 11 while patrons were watching the world cup.

Al-Shabaab, Al-Qaeda in Somali, claimed responsibility. And throughout the year Shabaab grew increasingly visible along the Kenyan border as its power in Somali increased.

I’ve written for a long time about how the west has had its collective head in the sand as regards terrorism and Al-Qaeda in particular. Long ago I pointed out that the locus of Al-Qaeda terrorism had moved to the horn from Afghanistan, and this year proved it in spades.

The country with the most to lose and most to gain in this war on terror is Kenya, because of its long shared border with Somalia. And the year also marked a striking increase in the Kenyan government’s war on terror, and with considerable success.

With much more deftness and delicacy than us Kenya has stepped up the battle against Al-Shabaab while pursuing policies aimed at pacifying any overt threats to its security, by such brilliant moves as allowing Omar Bashir into the country and not arresting him (on an international U.N. warrant). As I said in a blog, Kenya Gets It, and the story is therefore a hopeful one.

The Congo Wars continue but are abating, and in large part because of a little known provision in the Dodd-Frank Wall Street Reform Act which now makes it almost impossible for major corporations in the U.S. to buy the precious metal Coltan on the black market.

A black market which has funded perhaps Africa’s most horrible war for more than a generation. Hundreds of thousands – perhaps millions – have been killed and raped, and more than 20,000 children conscripted into brutal wars, funded by purchases of Coltan and other precious metals by Intel, Sony and Apple.

It certainly wasn’t just this little legislative move. The U.N. peace-keeping force, fabulous diplomatic initiatives by Uganda and a real diplomatic vigilance by the U.S. all were instrumental. But the year ended with the least violence in the region in more than two decades.

#4: SOUTH SUDAN
I may be jumping the gun on this one, because the referendum to create a new country, the South Sudan, is not scheduled to occur before next month. But the runup to the referendum, including the registration process, while labored looks like it’s working. 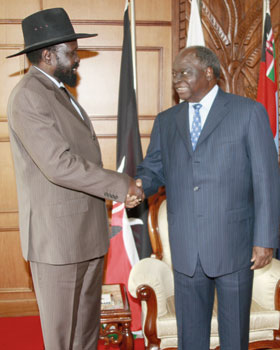 Allied loosely with the Congo Wars, the civil war between the North and South Sudan had gone on for generations until a brokered peace deal five years ago included the ultimate end to the story: succession of the South into a new country.

The concept is rife with problems, most notably that the division line straddles important oil-producing areas. But in spite of all of this, and many other ups and downs along the way, it looks to me like there will be a South Sudan, and soon. And this year’s new U.N. presence in Juba, donor-construction of roads and airports, all points to the main global players in the controversy also thinking the same.

The creation of a new state out of a near failed one is not the be-all or end-all of the many problems of this massive and powerfully oil-rich area. But it is a giant leap forward. 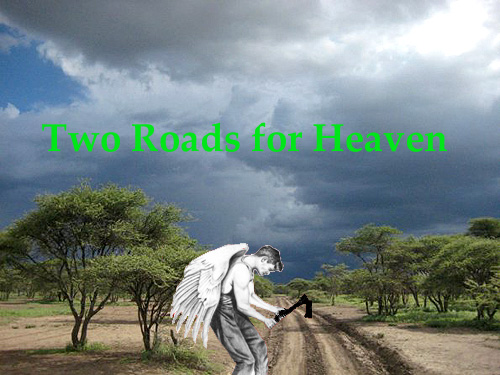 But like so many reports of this controversy, the simplification ran amok. NBC’s reporter Engels claimed the motivation for the road was to facilitate rare earth metals like Coltan (see above) getting into Chinese hands more quickly.

While there may be something to this, it’s definitely not the main reason, which is much more general and harder therefore to fight. As I’ve often written, the highway as planned will be a real boon to the Maasai currently living to the east of the Serengeti, as much if not more than to the Chinese.

And as far as I know, Maasai don’t use Coltan.

Roads bring commerce and may be the single quickest way to develop a region. This region is sorely in need of development and recent Tanzania politics has aligned to the need for this regional development.

The highway is just one of many such issues which came to the fore throughout 2010 in Kenya and Tanzania. Concern that the west is just interested in East Africa as a vacation destination with no regards for the struggle for development, has governed quite a few local elections this year.

The whole concept of tourism may be changing as the debate progresses. I believe very deeply that the Serengeti highway as proposed would hinder rather than help development. But as I’ve pointed out, alternatives are in the works.

And the real story of which the highway story is only a part, is how dramatically different East Africans have begun to view tourists in 2010.

#6: NEW RESOURCE DISCOVERIES ALTER GEOPOLITICS
For years I and other African experts have referred to East Africa as “resource-poor.” Kenya, in particular, had nothing but potash. Boy, did that change this year! 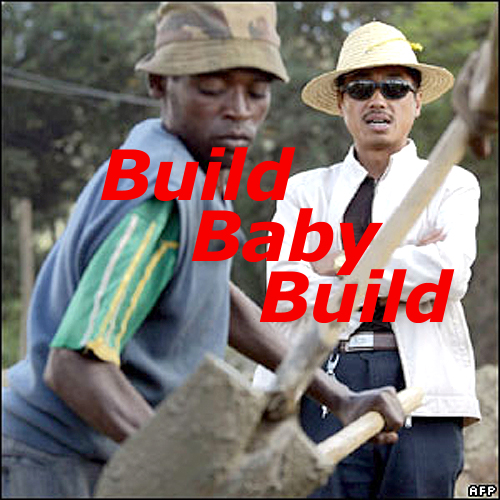 Although only one proven reserve has been announced in Kenya, several have begun production in Uganda and we know many more are to come.

China has announced plans for a pipeline and oil port in northern Kenya at a cost of nearly $16 billion dollars, that’s more than twice the entire annual budget for the Kenya government! Deep earth techniques have matured, and China knows how to use them.

A lot of these new discoveries are a result of technology improving: going deeper into the earth. But 2010 freed East Africa from the shackle of being “resource-poor” and that’s a very big deal.

#7: GAY RIGHTS ON THE HOOK
African societies have never embraced gay rights but as they rapidly develop, until now there was none of the gay bashing of the sort the rightest backlash produces in the U.S.


That changed this year, and in large part because of the meddling of U.S. rightest groups.

In what appears to now have been a concerted many year effort, support from U.S. righties is leading to a vote in Uganda’s parliament that would make homosexuality a capital offense, and would jail for long terms those who failed to out known gays.

This extreme is not African, it is American. Mostly an insidious attempt by those unable to evince such insanity in their own society to go to some more manipulative place. The story isn’t over as the vote has yet to occur, but it emerged and reached a crescendo this year.

#8: RHINO POACHING EXPLODES
Poaching is a constant problem in wildlife reserves worldwide and Africa in particular. Rhino are particularly vulnerable, and efforts to ensure safe, wild habitats have been decades in the making.


This year, they seemed to come apart. It’s not clear if the economic downturn has something to do with this, but the poaching seems to have morphed this year from individual crimes to corporate business plans.

This leap in criminal sophistication must be explained by wealth opportunities that haven’t existed previously. And whether that was the depressing of financial goals caused by the economic downturn, increased wealth in the Horn of Africa where so much of the rhino horn is destined, or reduced law enforcement, we don’t yet know. But 2010 was the sad year that this poaching exploded.

#9: IS HOT AIR BALLOONING SAFE?
Hot air ballooning in Africa’s two great wildernesses of the Maasai Mara (Kenya) and the Serengeti (Tanzania) has been a staple of exciting options to visiting tourists for nearly 30 years. That might be changing.


A terrible accident in the Serengeti in early October that killed two passengers and injured others opened a hornet’s nest of new questions.

After working on this story for some time I’ve personally concluded 2010 was the year I learned I should not step into a hot air balloon in East Africa, at least for the time being!

#10: EARLY MAN WONDERS
There were not quite as many spectacular discoveries or announcements about early man this year as in years previously, but one really did stand out as outstanding and you might wonder what it has to do with East Africa!


DNA testing of Neanderthal proved that early man from Africa didn’t wipe them out after all, but absorbed them into the ever-evolving homin species.

And that absorption, and not massacre, happened outside Africa to be sure. But it finally helps smooth out the story that began in Africa: It’s likely that Neanderthal were earlier migrants from Africa, and absorption was therefore easier, physiologically and biologically.

It’s a wonderful story, and fresh and exciting, unlike the only other major African early man announcement about Ardi which was really a much older story, anyway.

****************
HAPPY NEW YEAR to all my loyal readers, with a giant thank you from me for your attention but especially your wonderful comments throughout the year. See you next year!