Mutant creatures and animal enigmas will soon be “driving packs of tourists” into Tanzania, according to wildlife officials there. Hmm. Slow news day?

This most recent claim of wild and wooly animal freaks was made by Paschal Shelutete, TANAPA communications officer.

It’s wrong. First of all, the hairy gazelle he’s speaking about was photographed by tourist Robert Berntsen in November, in Kenya’s Maasai Mara; and earlier by Paolo Torchio in August… Again in the Mara, not the Serengeti.

Best diagnosis of the poor bloke Tommie is that she has Cushing’s Disease. The disease is caused by a variety of hormonal or pituary malfunctions and manifests itself differently in humans and animals. In humans the result is often loss of hair, but in animals, it can cause hirsutism, a condition of abnormal hair growth. 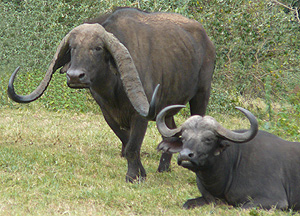 The professional level of TANAPA authorities reached new lows this year when they worked to end the current ban on international sales of elephant ivory, and fell in step with the politics driving the Serengeti highway. But this incredible claim by a TANAPA official, wrong on pathology and wrong on geography (his own!) leaves me speechless:

“Mr Shelutete believes the discovery will soon be driving packs of tourists, researchers and other curious observers to Tanzania to witness the discovery.”

Animal mutations, especially with regards to coloring, are rare but widely known. All the photos you see in this blog I took myself, with tiny little cameras since I’m no photographer. In several cases it’s hardly more than a loss of pigment. In others, like the buffalo in the Aberdare, the weird horn configurations are probably a result of inbreeding.