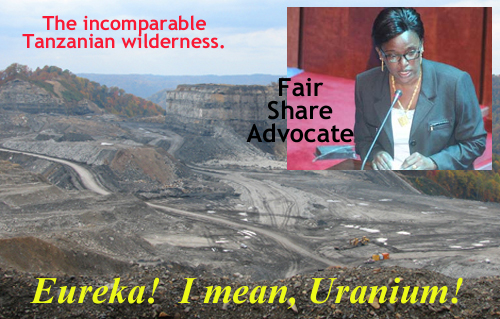 Tanzania’s scandals and sheer wastefulness of its bountiful natural resources are legendary. But last month’s incident took the prize.

In addition to the world’s second largest single vein of gold, countless copper and recent rumors of off-shore oil, large deposits of uranium were discovered hardly 100 miles from the port of Dar-es-Salaam last year.

The fact that most of the streaks were in the massive Selous Game Reserve really was incidental. According to the government less than 1% of the reserve would be effected.

Not the Tanzanian government is to be believed about the time the sun rises, but the way the natural resources ministry mismanaged the gold mining near Lake Victoria, which has essentially stalled normal mining, I think gave hope to many environmentalists who simply expected this new discovery will also be bungled.

But uranium has a “security” component to it gold does not. The interest of world powers is acute. No fewer than 26 multinationals (and one Tanzanian) company are now involved.

In approval faster than a speeding bullet, UNESCO who fought tooth and nail to protect a single road from bisecting the Serengeti, approved yet to be revealed mining methodology of the world’s largest protected wilderness, The Selous.

All to be expected, and despite my sarcasm I have never opposed proper natural resource extraction from Africa and I’ve always countenanced arguments for extracting it from protected wildernesses.

The fact is that the world is energy desperate and Africa is sitting on the golden goose. It’s about time that Africa get its fair share.

And that’s the problem, now. There are so few fair shares of Tanzania’s gold getting back to the local population that it’s a joke.

Now, one of the few rational, educated, articulate Tanzanian politicians, the shadow minister of natural resources, Ms. Halima Mdee, has revealed that one of Tanzania’s equally unscrupulous hunting companies, Game Frontiers, has actually sold off the block of Selous given it for hunting to a mining company!

And no one seems to care!

What’s more, Ms. Mdee seems to understand that any legal argument is pointless, so she is scolding the government on larger ethical and moral grounds.

“Other than the illegality of the contracts,” Tanzania’s Guardian newspaper reported, “she described what she called ‘unfair’ distribution of disbursed compensations on the part of the hunting company embezzling the villagers share.”

Did you get that?

The way to appeal to either popular consensus or somehow otherwise gain political advantage is to drop altogether the body of law in Tanzania and the rest of the world that disallows a hunting company to farm out a country’s resources, and claim that the local people in and around the hunting block aren’t getting their fair share of the loot from the illicit deal!

Whoa Tanzania. Yes, thank you Ms. Mdee, and by the way how are you doing with the laundry of al-Qaeda’s Somali weapons?