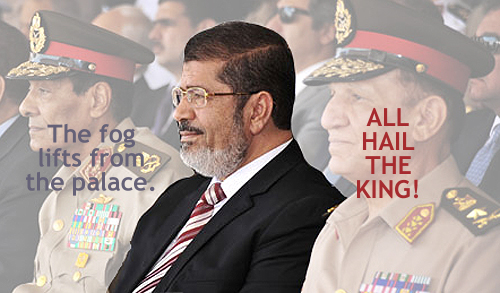 Yesterday, Egypt crowned a new prince. There is nothing for us as secular outsiders to fear of a powerfully Islamic ruler but a lot for the subjects of this new Egyptian strongman to fear.

After yesterday’s palace shakeup Mohamed Morsi is Egypt’s most powerful man. Yesterday, he emasculated the two most powerful military men who have ruled Egypt since Mubarak stepped down. He replaced them with young Islamists in the military clearly now beholden to him. And he has eliminated at least for the time being any legislature that could challenge him.

Time. The progressives who started the revolution long ago fizzled out in the face of overwhelming Islamic democratic sentiment among voters. Rather than force issues of womens’ rights, habeus corpus, free speech and such, they chose to wait and see how oppressive Morsi and team would be to their progressive ideas.

So far there’s been no chance to rate him; the Big Boys have been fighting for the crown. We don’t know what jewels may have spilled out. But one thing is clear: Morsi is scaring to death Egyptian democrats.

Now that the crown is clearly upon Morsi’s head the world may soon know how draconian or — on the completely other hand — how Islamically permissive Morsi will be. Analysts have been delving into Morsi’s past for a clue.

His many years as a college professor in California give progressives hope. Yet I see a remarkable similarity to the young Muammar Gaddafi who carefully and systematically removed opponents as he patiently came to power in 1966-69.

Morsi, however, is no Gaddafi. The Libyan leader for all his narcissism and greed was for all practical purposes a moderate Islamist perhaps because he was a permissive and pretty immoral individual. Morsi is anything but: his Islamic purity is almost terrifyingly strong.

Morsi’s final blow to his opposition was to effectively sack the military strongman Hussein Tantawi yesterday. He did this by manipulating an effective military coup led by the younger, Islamist officers clearly allied to him. And he did it on the 23rd day of Ramadan, which the Koran labels as the “Night of Power.”

Each night of Ramadan Morsi breaks his own highly publicized fast by a 5-minute radio broadcast that answers what are supposedly random call-in questions by everyday Egyptians. But the highly scripted and professionally edited segments are anything but random.

What progressive Egyptians fear most is that two popular ideologies, democracy and Islam, are in critical ways diametrically opposed. But the questions Morsi allows – quite contrary to the flattering NPR report cited above — are about how many bakeries exist and which potholes will be repaired first.

There is no mention of Egypt’s escalating crime, crumbling military in the troubled Sinai, increasing power outages, escalating unemployment or self-imploding stock exchange.

What seems clear to me is that these big, critical issues have been intentionally ignored while the fog slowly lifted from the palace.

Well, the sky is crystal clear today. There is one man in power. He controls the military. And despite earlier popular attempts to recreate a legislature, he has said that Parliament will not reconvene. Since Egypt’s judiciary is essentially a military creation, this means today that Morsi is president, lawmaker and judge.