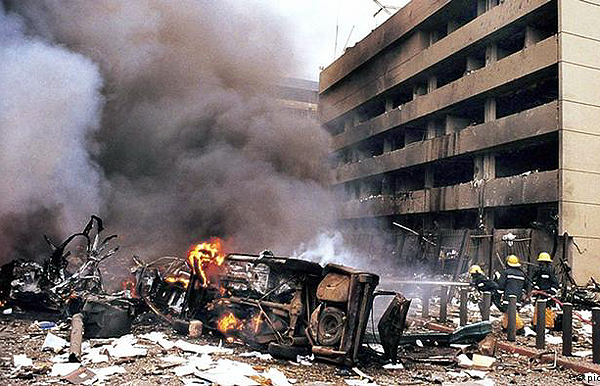 Twenty years ago this morning I scurried about my Garden Cottage room in the Norfolk Hotel in Nairobi grabbing all sorts of pieces of paper and maps and hastily stuffing them into my briefcase. I was late for my 10:30a meeting with my transport manager.

I saved oh 2 or 3 seconds jumping over the rails of my patio onto the beautiful central Norfolk garden grounds. The instant my feet hit the grass the bomb detonated. A terrible era began.

242 people were killed. More than three square miles of the center city suffered damage. Quickly others joined me on the grounds of the Norfolk as we gathered around the few of those with the newfangled “mobile” phones.

“Nuclear hit on Mombasa naval base!” one idiot shouted, then ran away. No one believed him but we had no idea.

For several minutes it was almost like a garden party, all these nicely suited gentlemen (I was the exception) walking about very dignified unable to decide what to do as the sky turned milky. We even exchanged handshakes and calling cards, all as the sky above slowly turned milky.

About ten minutes after the blast everyone looked up. Bits of paper and small charred pieces of clothing seemed to be floating out of the sky. A pair of sun glasses without its left arm dropped just beside my shoes.

“CNN!” someone shouted from within the hotel and we all went running back to our TVs.

It was around 11 a.m. when CNN reported that the American embassy in Nairobi had been annihilated.

I whipped into gear. This time taking the hall I went racing towards the very delayed meeting. It was a 15 minute walk to the coffee shop that Peter and I enjoyed mixing into our business. I didn’t get more than a few feet down the hall. Peter was coming to me.

We went back into the room. CNN was still on. Now they were reporting the embassy in Dar had been blown up, too.

One of my groups had just left the city that morning, an alumni association with 38 people. They were headed to Amboseli and I figured if they had left on time they’d be about half way there.

The group I was personally guiding was on their way, in Europe waiting for the next overnight flight to Nairobi.

Our chief driver, James, knocked at the door about 11:30a. He would be with me the next day. The three of us decided exactly what we had to do and then all left the hotel quickly. It was just before noon.

Peter got in his rover and headed out of the city to his home where he knew the phones were secure and would likely continue to work. James and I decided to walk towards the blast.

I don’t remember sirens. A lot of them didn’t work on the police cars, anyway, but we couldn’t get further than a block from the hotel. Hordes of people were coming towards us, most of them running. Official cars had blocked all the roads. It was useless for the time being to buck the streams of people. We went back to the hotel and pretended to have lunch. Better to let things settle down, anyway. Our office in Chicago wouldn’t even open for another three hours.

In the short hour we sat in the Delamere grill sipping beer and little else, the skies darkened and the smell of burning infused what would otherwise have been a beautiful August Kenyan morning. The bar TV had CNN blaring. Some group called Al-Qaeda claimed responsibility.

There were a lot of Muslims in Nairobi. Now for sure I had to see what the streets were like. Would every American be a target?

When we went back onto the street, it was like a ghost town. Still James and I walked towards the blast. The police had shrunk their blocked area and we managed to get onto Kenyatta Avenue, the city’s main drag, and there were all sorts of people there, most of them in uniform.

For the rest of the afternoon we circumvented the blast site talking to people. My Swahili was getting better, but almost everybody was speaking Kikuyu, and James was translating. We circled back to the hotel. The phones were working. Peter said the other safari was safe in Amboseli.

I called Chicago. My wife, Kathleen Morgan, had everyone working overtime. She had herself contacted the people in Europe, tracking down one group in a far away French vineyard. Everyone outside Kenya actually seemed to know more about what had happened than we did. But the big question remained, was it safe for people to still come?

EWT gave everyone the option to cash in and cancel. But everyone was waiting for my report to make a final decision.

James and I went back out just before sunset. So much of the city was still burning, and twilight made it seemed worse. The first thing I noticed were Israeli soldiers with dogs suddenly all over the place. British agents and American FBI – all of whom stayed in the Norfolk – didn’t arrive until the next day, but the Israeli were already there.

As night fell I still couldn’t get a handle on whether the local people were incensed with America making any visit by an American a bad idea. We took an odd route back to the hotel, past the city’s main mosque, and it was in flames. When Nairobi residents learned that a Muslim terrorist group was responsible, they burned their main mosque. We stood across the street with the police watching the white stucco go up in flames.

Nobody in EWT’s two groups canceled. So nobody went home from the first group, and my group composed of a grandmother with children and grandchildren and second family with a single child were boarding their planes to Nairobi when I finally turned off the TV to go to sleep. I guzzled a small bottle of water and stared at the ceiling.

This was only the beginning.