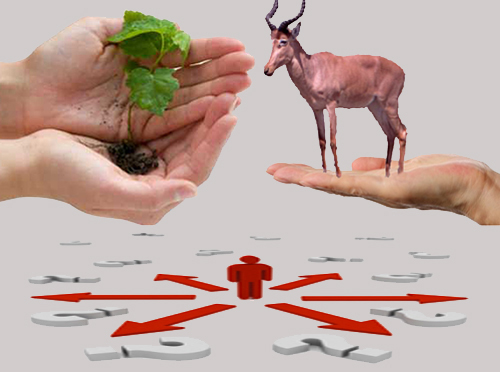 East Africa’s hirola antelope may soon become the second antelope in 100 years to go extinct. So what?

If hirola become extinct they would join the Bubal Hartebeest as the two antelope which went extinct in the last 100 years. An allied species, the Schomburgk’s deer, would make three.

And the extinction in all three cases is due to habitat loss, aggravated by hunting. All three would likely be survivors if man were not also competing for their territories.

In the last hundred years 12 other larger mammals (in addition to the 3 mentioned above) have gone extinct:

The rhino, wallabies and seal were hunted to extinction. The ibex suffered the same fate as the antelope above (habitat loss aggravated by global warming and human competition). The predators likely went extinct because the food source they depended upon diminished.

Wrong. Big mammal extinctions are the itty bitty tip of the iceberg, and you’d have to go back multiple centuries to obtain the next 12 bigger mammal extinctions. And mammals represent only a very tiny fraction of the life forms on earth.

Species conservation as a social and political goal began about a 100 years ago with Teddy Roosevelt and John Muir. In those early days its justification was mostly to preserve lovely things for future generations when preservation did not require considerable resources to succeed.

A half century ago preserving lovely things for future generations became trumped by the mandate to maintain as great a biodiversity on the planet as possible. The arguments for biodiversity are powerful but often complicated. They’re best summed up by a 2010 Cornell University study that essentially argued that biodiversity is a defense against the greatest threats to humankind like viruses.

Lately, though, the public isn’t buying the science. Most polls show that a very slim margin but more than 50% of Americans no longer believe there is anything wrong with extinction.

But I tend to ignore about half of America, that also disbelieves global warming and evolution. Ignorant Americans are a danger to the future, but they haven’t at least as yet deterred good science. And we can hope that in a relatively short time, good science will prevail, again.

But what about the hirola? Should Nature Conservancy and its partners conduct a fund-raising campaign that will net tens of thousands of dollars for land purchase and management, anti-poaching and veterinarian services to protect a single species of antelope in the wild?

Or, should the tens of thousands of dollars that need to be spent to do so better be used to manage the Dadaab refugee catastrophe that is very nearby?

Or, should the tens of thousands of dollars better be spent to save 100 species of plants in the Amazon?

Or, should the tens of thousands of dollars to create and maintain The Ishaqbini Hirola Community Conservancy better be spent to actually pay for building the rerouted Serengeti Highway?

I could go on and on. Northern Kenya where the hirola exist is one of the most stressed areas on earth. The focus there should be on the Dadaab refugees first, not the hirola. And the loss of the hirola in the wild does not mean an extinction of the species, just of the species in the wild.

And the resources that seem would be required to do this job are enormous relative to hundreds of other projects to maintain the planet’s biodiversity.

Should the hirola be saved. Yes. But not at the cost of so many other possible species rescues.

No matter they might be little green vines that don’t elicit tears from rich people.