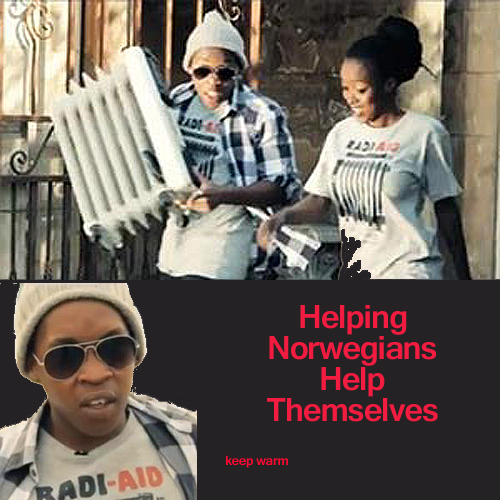 Recent climate change has led to extreme climate conditions, everywhere, and in Norway temperatures are at historic lows. Africans are mobilizing to help.

Young people from all over South Africa are responding to the climatology crisis by collecting radiators to send to Oslo.

So in solidarity with the generous South Africans my Thanksgiving family household joined in the movement which is sweeping across the world. We have a particular attachment: we have Norwegian roots.

The day after Thanksgiving is traditionally at my house a time of baking Norwegian Christmas cookies: Berliner Kranz, Fattigmandsbakkels and other multiple syllabic overly consonant cookies.

As is custom, the men go out to bars and the women bake. At the end of the day, the women divide the cookies.

This year in solidarity with the South Africans we set aside one cannister of Fattigmandsbakkels to send to the poor Norwegians. It’s a particularly ironically sad moment when you return to a certain sector of humanity something that was once theirs to begin with.

Norwegians, of course, are speechless. At least in English. Except Norwegian students, who are embracing the aid as an indication of heart-felt human compassion.

This gesture to help warm a freezing part of the world ranks right up at the top, not just of earth, but of goodwill. It meets my minimum standards of what my clients should bring to Africa to help out.

Outpourings of shoes, for instance, will go a long way towards helping Africans to walk the walk. And for talking the talk, we can leave them our unused throat lozenges at the end of the safari.

For once we’ve all demonstrated, here as we bake Christmas cookies, and there in South Africa as they rap up the radiators, that government aid is nothing but a corrupt monster of goodwill, and that our individual efforts alone can change the world.

Think, for example, of how warm Norway could be if everyone in Africa sent them a radiator! It’s mind-boggling.

Climate change would no longer matter, because it would never be cold in Norway.

There are many fewer people in Norway than you think. So just one radiator from every South African household which usually has at least two would more than completely solve the problem.

It’s messages of this sort that we must spread across the world. Breezy V’s next music video will be sponsored by Coca Cola and we will all hold hands.

Warmed, at last, by radiators!