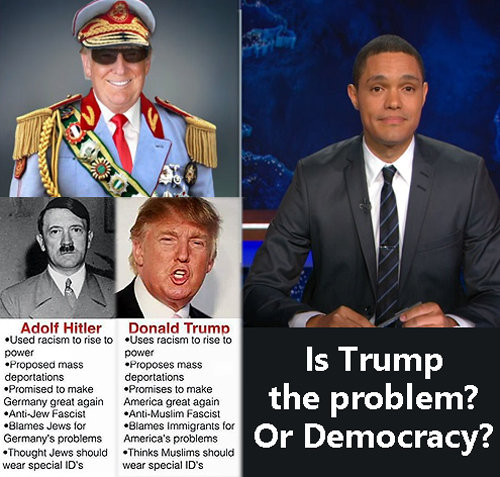 Africa, like the U.S., is beginning to take Trump seriously. It’s no longer a fluke. It’s a nightmare.

“There is more to Trump than attention-grabbing outrage,” one of Nairobi’s main radio stations broadcast yesterday.

The image above comparing Trump to Hitler was tweeted by a 20-year old in Malaysia, and was retweeted thousands of times around South Africa until one of the country’s main news services, IOL-Business, picked it up as a leader on a story about Trump.

There’s a lot of lofty debate whether Trump is like Hitler, following the provocative Washington Post’s opinion piece claiming so.

Frankly, I don’t think Africans care much whether Trump is like Hitler.

There’s always a crazy, even a veritably unhinged political leader. But it’s the texture of the popular support among the locals that defines the era.

I think what Africans like many of us are exploring is the confusion with Trump’s support, seemingly unfathomable, as was Hitler’s in his early days.

A reporter for a Nigerian newspaper was at Trump’s South Carolina rally last night. He wrote:

Africans have been preached to for several generations about the importance of democracy to a moral society.

“If a clown like Donald Trump can campaign for the presidency, Rwanda is better off giving Kagame a third term as he has brought about a significant turnaround for his country.”

Paul Kagame is Rwanda’s dictator, nurtured by France and the U.S. because he has imposed peace on the troubled country, albeit as ruthlessly as Stalin. Technically, the constitution rammed down Rwandans’ throats in 1994 by the U.S. and France prohibits Kagame from a further term. Hm. Some conundrum, eh?

That is only one of many conundrums of democracy. People convinced to vote against their self-interest, people manipulated by a Trump to channel legitimate anger in immoral directions, dumbing down issues until they are meaningless … these all emasculate democracy.

Donald Trump brings them into stark relief in the home of modern democracy, America.

Should I say: it gives democracy a bad name?

Or should we own up to the fact that people not voting, and people voting without adequately studying the complex issues of the day, and an electorate about as stupid as you can imagine because those who weren’t stupid withdrew public educational support for two generations are the real culprits?

Democracy is not automatic. It must be earned and nurtured. To my African friends all I can say is take heed:

Donald Trump is in some ways like Adolf Hitler. When power flounders the shark attacks. A poorly stoked and nurtured democracy is the best place anywhere for strongmen to succeed.