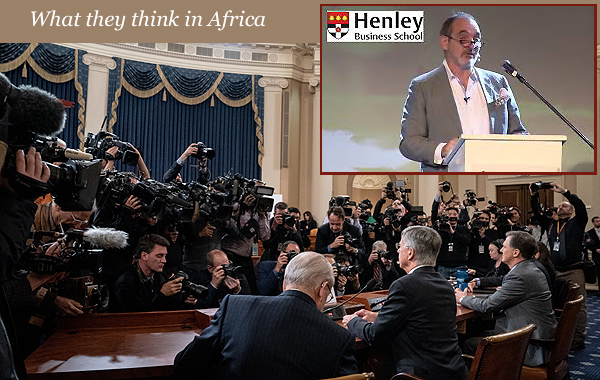 South Africa’s economy is founded on metals. It’s not been doing well recently. The analyst at South Africa’s Investing.com attributed the rise to “uncertainty over the outlook for a U.S.-China trade deal and the first day of public impeachment .”

African media from many diverse cultures like Nigeria, Rwanda and South Africa mostly use Reuters reporting when they lack their own journalists on site.

The main Reuters story appeared in dozens if not hundreds of African newspapers on the front or second page, today:

“Consequential, but dull” was the headline.

But in typical German stoicism this was news not analysis. The “dull” was a reference to Donald, Jr.’s tweeting during the hearing that it was “boring and dull.”

Jon Foster-Pedley, dean of the Henley Business School Africa, wrote obliquely not about the hearings per se but about Trump and others in the world like him. I think he explained very well our contemporary socio-political conundrum:

“We are living in an era of some of the most visible and vocal leaders on the planet and feeling the impact, not because they’re particularly good, but because they are fearlessly propagating their views — backed by an array of communication tools that are as unprecedented as they are all-pervasive.

“Demagoguery has replaced rational thought, leading to a dangerous surge in nationalism from east to west… The reasons are myriad, but most come down to the general resentment of publics feeling isolated and impotent in the face of rising economic instability and job insecurity, exacerbated by the growing disruption of almost everything they have taken for granted for many years.”

I suppose there’s nothing particularly new in this analysis, but what I find interesting is his deeper explanation for why we have so many “demagogues” leading our countries at the moment, and what to do about it. It’s all about “identity politics,” the art of narrowly defining your power group.

“Identity politics allows the unscrupulous to create enemies of the out-groups, essentially dehumanising them…; we need think only of the Nazi concentration camps or indeed the crime against humanity that was the legalised discrimination of apartheid. Fear is never about the thing, but the feeling you associate with the thing, but because of that feeling we kill the thing, not the feeling. The snake or the spider doesn’t have to be killed, it’s the fear that makes us do it.”

People are fearful. Fearful of their income, their health care, their security. As societies engineered remedies for all these discomforts, it just got too complicated and simply increased the fears.

What I specially love about Foster-Pedley is his certainty that returning to peace and stability means that, “We need to radically transform our economies.” Remember, this comes from a businessman.

And Foster-Pedley suggests we achieve this the same way that a demagogue harnessed identity politics: with “fearless leadership.”

Even if you lose, because at least you’ve given the people the right to choose something clearly transformative. Go Bernie. And maybe, go Elizabeth. But so far, no one else.