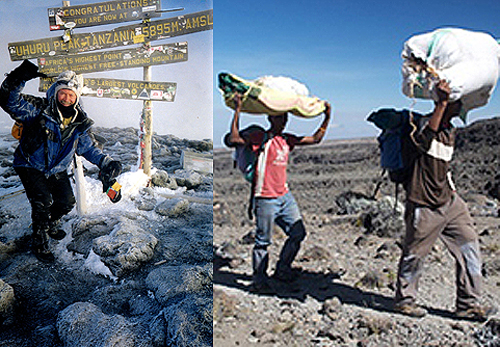 At least 20,000 people try to summit Mt. Kilimanjaro every year, but those planning to do so next month have an even greater risk of not making it.

Now this isn’t the first time porters and guides on Kilimanjaro have threatened a strike. It’s actually the third time since 2011, each time running up to a start date before the government finally mediated.

Each of those times meetings were convened and agreements made that were never kept.

“They are furious over the apparent failure by the government to implement the terms the two parties had agreed” in August, which was to be implemented in 60 days, according to a reporter for the Arusha Times.

The dispute this year came to a head on October 7 when guide and porter representatives went to attend a meeting arranged during the August negotiations to evaluate implementation of the agreement. No one from the government showed up, ironically because the government later claimed it didn’t have the funds to convene the event.

A porter on Kilimanjaro usually gets paid between $15-20/day. The better climbing companies then recommend to the clients that a tip equal to an average of $5-8/day be given at the end of the climb, resulting in actual wages of $20-28/day.

But there are many companies which delay paying the porters. At last check 290 companies were registered with the Tanzanian tourism authorities to operate climbs on Mt. Kilimanjaro.

Porters normally carry up to forty pounds, although some have been recorded carrying sixty. As a daily wage the level is actually above average for most Tanzanian tourism workers, but the amount of work they get fluctuates greatly, is very seasonal and never guaranteed.

Because there are few qualifications required to become a porter, the industry is never without applicants. New applicants are generally paid less than veterans, and this results in a constant race to the bottom. Many porters will spend the first several years working less than 30 days annually.

The fact that there are many more applicants than there are jobs, it makes the idea of a strike somewhat illusory, and this may be part of the reason a strike has never actually been staged despite repeated confrontations with the government.

On the other hand, the last-minute government mediation and various agreements made – even if not implemented – suggests the government takes the threats seriously.

While I have seen reports that there are upwards of 60,000 climbers annually government numbers suggest about a third of that. More than 80% of climbers travel the relatively inexpensive “Coca-Cola” route known as Marangu, a 3-days up and 2-days down, 4-night excursion that retails for around $1000.

Twenty percent travel more scenic and less challenging routes that take 2-4 days longer and are generally outfitted by more reputable companies. These week-long climbs can cost as much as $5000 but absolutely attract the more seasoned porters and guides.

Regardless of the route or style chosen, the government mandates that each climber have at least one porter. The more expensive, more scenic and longer climbs often field a staff of up to 25 for as few as 4-6 clients.

Climbing Kili is a bucket list item that attracts a huge range of people, mainly because it really isn’t a climb. No implements are required and it’s a well traveled path that’s followed, regardless of which of the six routes are taken.

The challenge is altitude, with 12,000′ being the make or break point. The summit is 19,347′. About half of Kili’s climbers are unable to make the top because of the effect of altitude.

If the porters strike, and if scabs aren’t allowed (which is normal government labor policy) then the climbs will stop. But frankly it’s hard to imagine.

Despite the government’s posturing that suggests a serious concern with the threat, it’s hard to see it happening this time. I think everyone might just be aiming a little bit too high.