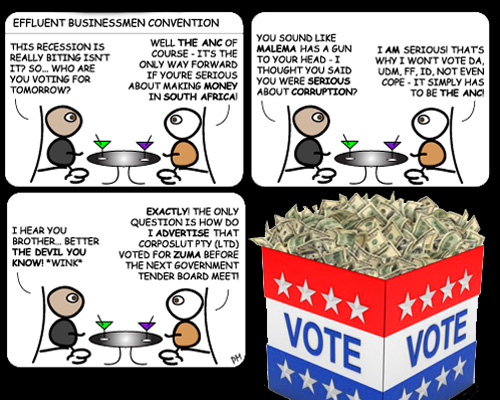 South Africa like the U.S. allows unlimited campaign financing but Kenya has moved to severely regulate it. Which democracy is likely to last?

These two democratic powerhouses both have progressive constitutions but differ radically on candidate funding. Kenya has yet to hold an election under its new constitution but South Africa is well along, yet I think it’s already clear that Kenya’s much greater regulations will lead to fairer outcomes.

South Africa and the U.S. have essentially unregulated candidate financing. Don’t be fooled by those who argue otherwise, because “essentially” is the formative adverb. There are filings and partial disclosures, but “essentially” a candidate can solicit and distribute unlimited amounts of cash to promote the campaign.

Kenya, on the other hand, is severely restricting such financing. In fact the regulations are so tight that there is public concern that the commissioners regulating the campaign could themselves become instruments of unfairness.

And that’s the current debate in Kenya. There is no debate about whether there should be stiff regulation. Everyone supports in principal rules for limiting campaign spending based on the population and individual earnings level of the electoral area.

Kenya also prohibits corporate financing of individual campaigns as well as severely limits how much a candidate himself can contribute to his own campaign.

It takes no rocket scientist to know why. Money buys votes.

I remember my grandfather in Chicago talking about the rigged elections for mayor. Once we even visited a bar where the alderman was buying drinks for potential voters and … passing out cash.

Later I remember living in Kenya where exactly the same thing happened: Local politicians in a bar buying drinks and votes.

Getting a free beer or pocketing some cash doesn’t in itself guarantee that voter will even go into the ballot box and then if he does tick off your name. So a bit of cleverness was required in those days long past, and it basically came as follows:

“What’s the other guy giving you?”

The answer was rarely “nothing” and more often was always “not enough.”

And that’s the hook in today’s world, too, whether it be South Africa, Kenya or the U.S. Of course there is never enough so long as more is possible. And as evidence that I can provide you with more, here’s a beer.

Or a promised tax cut. Or a promise of “deregulation” intended to mean more cash in your pocket. Ultimately a promise to make you richer, like those who are already rich buying you off.

South Africa after twenty years of new independence is feeling the effects of such unregulated financing. The country is far richer than Kenya and in that regards much like the U.S.

But one party has dominated South African government since Mandela became its first president, the ANC, and the cogent argument today is that money has made it that way.

U.S. election lawyer, Michael Lowry, describes precisely how unregulated financing in South Africa has led to the dominance of the ANC. And like the U.S. it’s more onerous than just the election of a single candidate:

Once unrestricted campaigns elect rich politicians, the dynamic quickly moves to the actual levers of power. In other words, only the rich begin to earn cabinet posts and even military positions.

And democracy no longer exists.