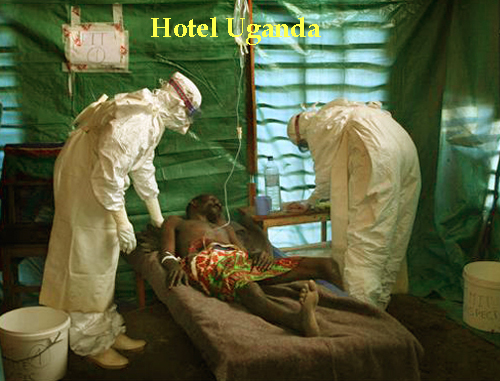 There is a reason that ebola has reached Kampala, and it’s the same reason I’ve recommended against visiting Uganda for a while: the dictatorial Ugandan government.

The first (and last) time that ebola (or what we thought might have been ebola) reached a metropolitan area was in Nairobi in 1980, which became the subject of the documentary book “Hot Zone.” But in 1980 the size of Africa’s city populations were much smaller. Transport around the area and even just within the cities themselves was nowhere near as easy as it is, today.

As the most infectious disease we know on earth, the Kampala outbreak may unfortunately be a story only just beginning.

All the neighboring countries have moved into full-scale alert. Kenya has put all its national hospitals on special alert and has dispatched health officers to all border crossings with protective Hazmat gear.

“All the necessary kit and medical supplies needed have been assembled and dispatched to health facilities in the bordering districts,” Rwanda’s New Times newspaper reported this morning.

The South Sudan government said it will “not take any chances“ with the disease and has mobilized its national health network.

This is the fourth outbreak of ebola in Uganda since 2000. This is the first time that an announced original outbreak was not contained. Whatever the reasons for not being able to contain it this time, the reason it reached Kampala so quickly from the far end of the country is because the government of Uganda lied about the outbreak.

Three days before 14 people hemorrhaged to death in Kampala’s Mulago hospital, the government denied there was an outbreak. Friday, the Associated Press quoted a Ugandan government official who dismissed the possibility of a widely reported ebola outbreak in Kibaale province “as merely a rumor.”

Two days before the outbreak appeared in Kampala, a local news source quoting government authorities reported that “The team deployed in Kibaale has indicated that the outbreak is now fully contained and no further spread is expected to take place.”

This misinformation is typical of Ugandan authorities.

London’s Daily Telegraph tells the story best. After an outbreak in a nonrural area of northwest Uganda 2-3 weeks ago, the government tried to keep a lid on the story. When they were unable to, they claimed the outbreak had been contained. The confusion contributed to panic in the hospitals in the region, which led to people fleeing the area.

The Ugandan government’s policies of lies and misinformation are now beginning to undermine the little health care infrastructure that exists in its rural areas. Several weeks ago Transparency International issued a damning indictment of the government’s failing health care policies in rural Uganda.

Ebola’s incubation period is 7-10 days. One of the ironic components of this most infective of all diseases is that it’s so deadly if contained it kills itself pretty quickly. So if health officials can actually contain the disease this story will be dead and over in 3 weeks.

Unless, of course, Ugandan officials try to hide it, again.

I’ve said for a while now that the increasingly oppressive regime in Uganda with its unstable politic and jittery society makes it an undesirable destination for tourists.

And now there’s lot more reasons not to visit.