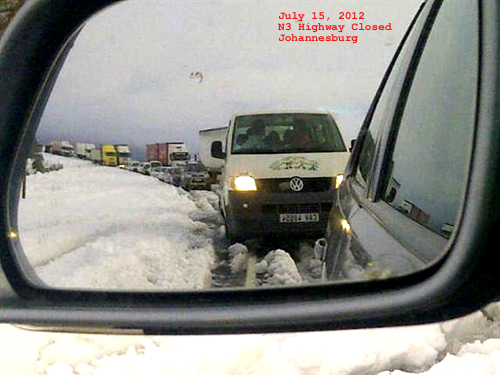 Weather you kill me or not, the world is spinning out of control. 3 dead in South Africa from heavy snow and cold; more than 100 die in my Midwest from heat.

I’ve had a lot of fun in my career surprising people with the facts of weather in Africa. Most Americans grow up believing Africa is the hot jungle it isn’t.

Most of sub-Saharan Africa has a statistical climate far milder and much more pleasant than many parts of North America, especially by own Midwest: Less hot in summer, less cold in winter, and much less severity.

Global warming is an extreme phenomenon. That means it just doesn’t get warmer each moment, it ping pongs from warmest to coldest, driest to wettest. The graph line trend is up and wetter, but the ride is anything but smooth.

Johannesburg’s longitude is exactly reversed to Ft. Lauderdale, Florida, or the tip of Texas. It’s in winter now, and snow is not unheard of. There’s even a single ski resort! However, it’s closed at the moment, because there’s too much snow.

Over the weekend, three people died from radical winter weather. National highways are gridlocked, the main and only highway between Johannesburg and the country’s third largest city, Durban, closed yesterday afternoon because of snow.

Record low temperatures and record amounts of snow has casued much of the country to shut down Monday and wait for the thaw predicted for tomorrow.

And while this version of winter is extremely rare in the Johannesburg area, in the interior of the country it’s virtually unheard of. The Cape, for example, sits above the planet’s warmest body of water, the Indian Ocean. But today, even The Cape is frozen by winter weather.

A lovely highland pass between Cape Town and the famous “Garden Route” that so many tourists drive is closed because of ice and snow.

Meanwhile back here in the balmy Midwest I sat outdoors yesterday evening with friends for a performance of Richard III in Spring Green, Wisconsin. We ended the evening feeling like we’d been hit by a truck.

It’s the heat to be sure, but the psychological effect of this relentless heat, driving past miles and miles of lost corn, seeing nothing but brown is enough to add ten degrees to the already scorched thermometer.

And today we in the Midwest begin three days of “hazardous weather” heat. The bland looking national weather warning uses industry jargon to describe the unusual and deadly situation as “headlines.”

Much of South Africa is no worse prepared for climate change than we are in the Midwest, which isn’t saying a lot. But of significantly more urgency is the fact that the vast majority of Africa is far less capable of dealing with this extreme weather.

Weather or not you kill me, you’ll likely first kill the Africans.