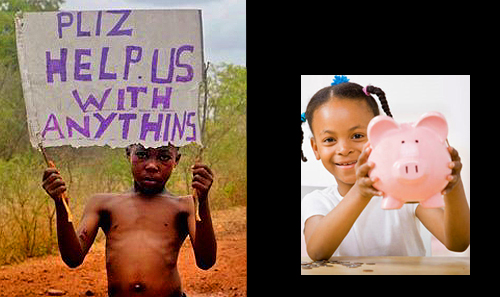 The Nobel concept of microfinance is being revealed as little more than a business whose effects on poverty are no better than any other banking enterprise. Darth Vader sits on many of their boards.

There’s something sweetly compassionate in the pure Islamic concept that money should never be lent at an interest rate. It’s also anathema to modern capitalism. Periodic negative cash flows are intrinsic to many successful businesses; and many genius if awkward ideas would never have come to fruition in our modern economies.

But the two radically different concepts have one thing in common: you’ve got to have money to make money. White angels might have existed in medieval times; today you need collateral.

About two decades ago microfinance emerged as a charitable bridge between the despised money lender and the little guy in need of a few bucks to run his gristmill:

Or buy his heifer, or paint his school house, or open his corner café, or buy his first bicycle so go he could go to work, or plant his half acre of white beans.

It was deemed so successful that many of its original proponents received world bonuses … like the Nobel Prize.

Bangladeshi Muhammad Yunus became the world’s poster banker for helping the poor while helping himself. But, of course, he didn’t intend to help himself; he just meant to help the poor.

The concept is simple. Lend very small amounts of money to responsible people who are very likely to pay you back and keep the interest rate down.

It’s also been around for a very long time. Self-help groups in India formed during the British colonial period and continue throughout the developing world, today. U.S. credit unions were originally formed to provide the service here, although they’ve “grown up” in recent years.

This is a huge capitalistic market, and especially in emerging economies where the only big thing is the urban slum. And since “small” banks don’t exist anywhere, not even in Dhaka, it wasn’t a job banks were doing or wanted to.

The Heifer Project was more or less an early type, and after Yunus won the Nobel Prize in 2006, microfinance became all the fashion. Three Cups of Tea followed on its heals, and today a slough of so-called microfinance charities exist. One of the largest in the U.S. is KIVA whose young female founder and CEO is now the star of a number of national television commercials.

But as New York Times’ Nicholas Kristoff so aptly put it, Three Cups of Tea … spilled. Three Cups of Tea was a patent scam. Money solicited for schools was used for the founders’ own increasingly lavish lifestyle. Moreover, his claims and promises about the why and wherefore of his projects proved widely untrue.

But to be fair, most of the microfinance groups are not like Three Cups of Tea. Their missions aren’t made up. A reasonable percentage of donor money actually gets to the developing area.

The problem is a problem with the concept of microfinance more than with the individual entities that do it. And I think it fair, today, to claim that lofty claims of goodness no longer apply. And there are some critical thinkers who believe microfinance actually increases poverty.

The first discoveries made by analysts in the early 2000s applied to organizations like the Heifer Project where growth spurned greed in the organization. Salaries went up, administrative costs became so high in the Heifer Project that the founders created a shadow foundation board to hide some of the money. In some states this is a felony.

That’s been remedied and today the Heifer Project looks more like it did when it first started, and illegalities are no longer assumed. And the attention that was poured on the Heifer Project about ten years ago reigned in much of these tendencies by other micro finance groups.

But after the scandals of Three Cups of Tea and the early Heifer Project dual foundations, criticism of microfinance in general exploded.

KIVA, America’s microfinance dandy of the here and now, was first harshly criticized almost three years ago by a charity whistle-blower, David Roodman.

Roodman doesn’t claim that like Heifer or Three Cups of Tea, KIVA’s practices may be illegal. Rather, he claims that KIVA manipulates donor money (in the way any good bank would) to maximize effect, and in so doing is misleading donors about what they are actually doing.

KIVA solicits your funds by showing you a number of uplifting small business projects to which you can donate. You then open an account with your donation, which immediately depletes and then fills back up as the debtor repays the loan. You can then, as most do, elect to place your money and its modest earnings into another project.

The problem is that your money is pooled with everyone else’s, and KIVA’s directors disperse it as they see fit.

There’s nothing illegal about this, although it does strike me as sort of a ponzi scheme with yourself. But the point is that it’s grossly misleading.

KIVA realizes that if you as a small benefactor were simply solicited to “fund a small microfinance bank” you’d be much less likely to give than if you supposedly target your money for helping a Congolese self-help group “to buy 2 tubs of tomatoes, a tub of peanuts, and 50 kg of sorghum.”

Thirty thousand people weekly are now contributing to KIVA. And as Roodman rightly points out, “In short, the person-to-person donor-to-borrower connections created by Kiva are partly fictional. I suspect that most Kiva users do not realize this. Yet Kiva prides itself on transparency.”

It remains unclear if Three Cups of Tea has remedied itself like the Heifer Project did. The American Institute of Charity (CharityWatch.org) gives Heifer an “A-“ rating, today.

And that’s the other maybe biggest part of the problem: organizations like CharityWatch and GuideStar are widely used by charity givers to determine if their noble intentions can find Nobel placement.

And through no fault of their own, charity rating agencies use the most basic business criterion to determine honesty if integrity of mission. Nothing wrong with this. It’s exactly what you as a donor should demand.

And that’s often the case, especially in the Africa I know. When I sit above my little yellow pad and start adding the millions – billions – of dollars Americans have given to so-called charities in Africa, and then understand how little development was actually produced, it’s heart-breaking.

Roodman has recently published a book, “Due Diligence, An Impertinent Inquiry into Microfinance” which I’d paraphrase in a simplistic way by the above statement, that the mission(s) of microfinance rarely work. And when they’re wrong, they contribute to poverty, they don’t alleviate it.

Roodman himself has been scrutinized, and that scrutiny is widely favorable. Both NGOs here at home as well as those in the developing world are increasingly critical of microfinance in general.

And the reason is pretty simple, too. Bad projects probably outnumber good projects. The private world of giving is probably no better – indeed, probably much worse – than government to government aid.

The net result of microfinance, like most private aid in general, harms the developing world, doesn’t help it.