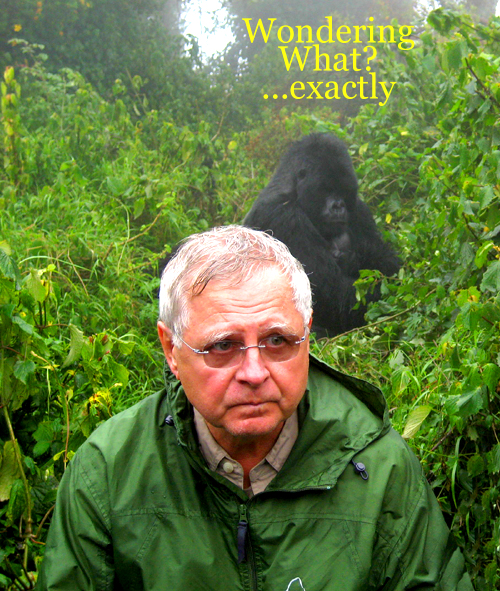 More than a million and a half viewers have watched the mountain gorilla YouTube. Is this the reason Rwanda has raised the permit price to $750?

I’m absolutely infuriated by this hike. The added revenue is not going to gorilla research, and the bulk of it is not going back into any kind of conservation whatever: it’s going to a very corrupted, dictatorial and inhumane Rwandan government.

There’s no way Rwanda will open its books so that we can see exactly where that $750 goes. The country has become one of the world’s worst human rights violators, thumbing its nose at virtually all organizations demanding public accountability. I’d speculate that $750 is divided something like this:

Second, this absurd cost to spend an hour with a wild animal continues the transformation of the planet’s wildernesses into a playground exclusively for the rich.

And thirdly, it coopts wilderness conservation from a scientific orientation into a commercial one insensitive to the needs of the Rwandan people, and in fact one which tacitly supports their oppression.

EWT sent some of the very first tourists up Karisoke during the first mountain gorilla visits in 1979. The permit cost was $25. There was one organization involved in the project and Rwanda was anything but a stable, modern country.

Today Rwanda is probably the most modern country in East Africa. Fiber cable has been laid or is being laid to carry the most advanced technologies to virtually every corner of this tiny country. The Rwandan economy – benefitting from a hugely disproportionate amount of foreign aid as a result of the ‘94 genocide – is booming.

And gorilla permits now cost 30 times what they originally did and there are more than a dozen foreign wildlife organizations working in the area. And, very importantly, the population of mountain gorillas has more than doubled to just under 800.

That population is probably near its maximum, because the habitat isn’t large enough for more. I’m sure that many scientists will disagree, but I’ll cynically suggest they are circumscribed by their own over-field population encouraged by Rwandan officials.

I’m sure throughout Africa there is more habitat suitable for mountain gorillas than there currently are mountain gorillas, but in Rwanda specially and alone, I think we’ve reached the maximum. The gorilla density in the Rwandan Virungas has exceeded its natural carrying capacity specifically to encourage tourism dollars.

The evidence of this is the growing size (numbers of individual per family) and the acceleration of family amalgamation and the growing examples of multiple silverbacks in the same family.

Humans in Rwanda are also overpopulated. But the state of the Rwandan people is far from being 30 times better than in 1979. There have been notable improvements in the eradication of some poverty and general overall economic development, but personal liberty and freedom of expression have been squashed like a gorilla stepping on a mushroom.

I’ve watched that YouTube video multiple times. I’ve listened to the person narrating the experience drift with his personal excitement into a world of inaccuracies that he either considered inconsequential or artistically fanciful, as proof we as tourists are being fashioned as the weapons against the local population, and as paymasters of the world’s worst dictators.

The excitement of the tourist in that video is still to me critically important. I’ve now trekked to see the gorillas more than 50 times and I will bring others, still again. Whatever else it may be, it is a haven of natural balance and beauty and every time some tourist bonds with it, we can hope her priorities have been realigned to saving the earth.

But just as we walk the Great Wall or paddle down the Tambopata, we must more than ever be cognizant of exactly what we’re doing, and I don’t mean shooting a video.

To me, developing the awareness of this awful conundrum in the so-called “wild” is the most important experience of all. It’s a very personal decision. For me as a guide, the absurdity of the cost provides an easier platform for me to help my clients achieve this special awareness. So not yet is the price too high. But what is too high, then? I don’t know. That’s my own, the guide’s conundrum.