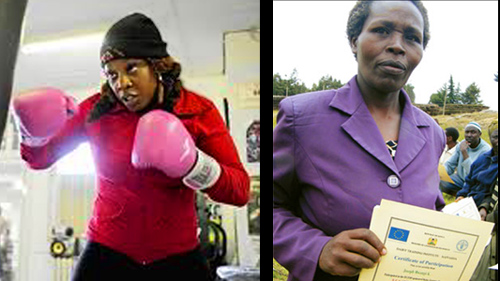 Gender equality, in contrast, is gaining much greater traction in the developing world, where people are much more segregated by race and gender, than in the developed world.

I hadn’t heard that women’s boxing was coming to this summer’s Olympics before the NPR report this weekend. And I have to admit that the instant reaction wasn’t one of liberation. When I finally saw Franchon Crews’ biceps I no longer felt an iota of wrongness or inappropriateness to the idea and was left with just a feeling of oddness.

This in contrast to my positive feelings when I read that a business woman in a rural area outside a secondary city of Kenya became Kenya’s first woman village elder.

When I first began working in Kenya forty years ago, women were hardly seen except toiling in the fields and carrying water. In several cases I met families where one of the wives couldn’t speak the language of her husband and probably would never learn it.

When a large rural school (all boys, always back then) announced they had hired my wife as the first ever woman teacher, they rebelled, struck classes and warned her that she would be killed if she walked through the classroom door.

The position of “elder” throughout all of traditional Africa is near synonymous with councilman or alderman, and it was always a man. In fact in almost all the African languages I know, “elder” is translated directly as “old man.”

You apply for the position the same way you’d apply to be appointed to the school or county board; there are some elections, but many are appointed by higher elected officials or higher governing bodies.

Kenya is implementing a new constitution that mandates almost a third of all public elected and appointed officials be women. Of all the radical and creative components to the new constitution, this one drew very little opposition and reflects now several generations of free education irrespective of gender.

But unlike the much longer transition here in America towards gender equality, older Kenyans living today remember as I do that women weren’t just excluded from important positions in the community, but that they rarely appeared!

This enormous change while not a suprise on reflection, to many older Kenyan men causes the same pause I felt when reading about Franchon Crews.

Catherine is the first at the village level! It may seem odd, but the higher up the political hierarchy you go, the more women have already appeared in prominent positions. Kenya has already had a number of elected women Members of Parliament, has had one woman run for president and a number in the top tiers of the judiciary.

But it’s at the grass roots that culture moves slowest, and Catherine’s revolutionary step is in that sense more notable than if she filed to run for president of the country.

It’s another great part of the wonderful story of Kenya’s cultural leaps and bounds. You can read much more about Catherine by clicking here.