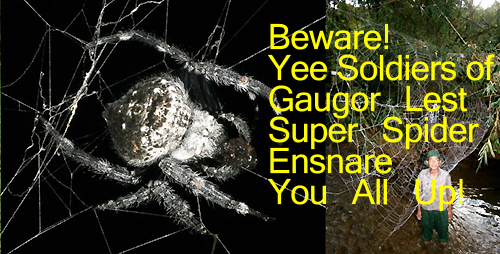 And the winners are! A jumping cockroach, an obscure little deer, an ostracized cricket, and a dragon spider whose web can cover a small Michigan lake!

These four newly discovered life forms all live in Africa, and out of 15-25,000 entrants in the annual Arizona State University list of the “Best New Species on Earth”, they all made the Top Ten.

The six non-Africa winners include a TRex leech, a bacteria that eats rust, a flat fish that hops like a bunny but under water, a fungi that creates greenish yellow light, a mushroom that lives at the bottom of the ocean, and a 7′ lizard that eats fruit.

I often listen to kids deride us old folks for having discovered all the earth, mapped the moon and mars, and generally ended the need for the word, exploration. It sends them into dark television rooms and the disease is called PlayStationitis.

But every year there are thousands – tens of thousands – of new life forms found here right at home on planet earth. In fact, the “little deer” is a duiker that was discovered in a butcher’s stall in Benin! And any random handful of them is easily more colorful and interesting than the animated antagonists of Warlords 2.

Staffers at ASU’s International Institute for Species Exploration work most of the first half of each year filtering the thousands of new species.

“Most are passed over because they do not stand out in a catchy way, or because they did not meet the requirements to be valid names under the codes of nomenclature,” according to Quentin D. Wheeler, ASU Vice President and Founding Director of the Institute. The 40 or 50 that the staffers finally come up with is then turned over to an international committee of scientists to choose the Top Ten. 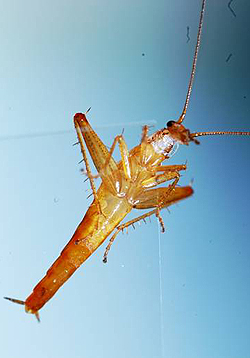 Saltoblattella montistabularis (the jumping cockroach) was found near the Silvermine area of the Cape Peninsula in South Africa, ten minutes from downtown Cape Town. It hops through the air like a grasshopper, but it eats anything in sight and can run as fast as 50 of its body lengths in a second. Yes, no grasshopper.

It’s a tiny little thing hardly a third of an inch long, discovered by Mike Picker, author of a South African insect field guide. It’s not the only jumping cockroach known to us. But the other one is only known to us from the fossil record. It lived with the dinosaurs! 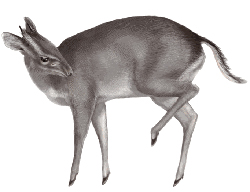 Philantomba walteri is an west African duiker that’s real cute when it’s not being prepared for barbecue. That’s how it was discovered! In a butcher’s stall in the Benin town of Mangiri! It’s a remarkable find, because this is an animal, a real (small dog) sized four-legged mammal, proof that we haven’t finished the grade school text books on basic life on earth. 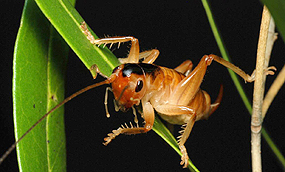 Glomeremus orchidophilus isn’t too disimiliar from your every day ordinary cricket, except that this Reunion Island creature’s main purpose in life is to pollinate an orchid! Most of its fellow orthopteras like locusts and katydids and such eat plants, they don’t help them grow! No wonder it’s been kept under wraps for so long!

But my favorite is the Madagascar dragon spider whose discovery is so profound it’s been given the common name, “Darwin’s Bark Spider.” (See top picture above.) I was ready for this one.

Last year I traveled with three scientists, a father and two sons all research biologists, and tried desperately to understand their conversations when our safari in Kenya’s Matthews Mountains was interrupted by the web of an orb spider.

Apparently scientists can synthesize the eight different chemical strands produced by most spider’s spinnerets, but they haven’t figured out yet how to weave them into the super strong strand mother nature decorates our forests with. (Thank you, John Cronan and sons.)

But that’s not all. Its silk has a toughness that’s been measured at “520MJ/m3.” I don’t know what that means, either, but according to the documentation this makes it “the toughest biological material ever studied, over ten times stronger than a similarly-sized piece of Kevlar” and twice as strong as any other known spider silk.

So there you have it. More mystery, beauty and perplexing awesomeness than an entire library of video games! And it’s all there, right outside.