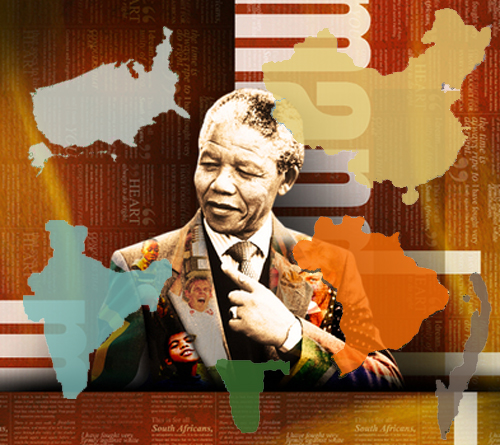 Nelson Mandela’s death mostly marks the end of predictable politics in South Africa, where reverence of him was the only reason that vying political factions didn’t compete on the public stage.

But the period of his dying will be remembered mostly for the crazed man scamming being a signing interpreter at his eulogy and the shake of hands between President Obama and Cuba’s president, Castro.

As an individual, Mandela exhibited the profound restraint and patience that is the hallmark of his generation – and the many before his – of being an African. It seems so unreal, today, that for so long Africans accepted slavery, then oppressive colonialism, then the strains and inherent oppression of being proxies for Cold War adversaries, even in light of the terrible power of their masters.

I say this not with the vengeance of youthful activists today, but with real fascination. The notion of “Live Free or Die” is hardly uniquely American. Revolutions around the world through all of time were fueled by this ultimate mantra.

But until recently, Africans turned over and gave up. This is a horrible generalization, I know, and there are countless examples throughout African history of heroic rebellions and Mahdi-like successes. But as a judgment over a long term of all of African history, I stand by it.

And Mandela was the epitome of one of its leaders. He steadfastly held to his principles. But he continually negotiated his oppression. When the tide turned in South Africa it was as much because of the world changing, and the super powers levying sanctions against the apartheid regime, as anything that Mandela and his cohorts were doing.

Mind you, the world may not have changed so fast, and sanctions certainly would not have been levied so quickly without the low level revolution and far more important widespread civil disobedience that Mandela and company had orchestrated.

But more similar to his earliest friend Gandhi than one of his later friends, Castro, Mandela believed justice was more inevitable than forced. Human rights were inalienable, and their achievement was only a matter of time.

I’m not sure, though, if Mandela had suddenly found himself in late 19th century Bolivia, or 18th century Paris, or 1950s China if he would have turned out to be the relatively passive revolutionary he was.

Most good leaders throughout time have been very special individuals with enormously deep and unfailing characters, staunch belief systems to which they remain steadfast, tremendous charisma and above all, very loyal and dedicated followers. Mandela fits this to a T.

But there must be many millions of people like that throughout history. Leaders come from this universe of good people, but they rise to power not because they have the potential to do so, but because by happenstance they are manifest by their societies. Power holders are products of widespread grass roots emotions. Rarely if ever has a powerful leader’s personal beliefs or actions alone created a successful social movement.

And that was what Mandela was, and it’s on the one hand heart warming and on the other, frustrating: Heart warming because of its intrinsic optimism and faith in the human condition; Frustrating because it takes so long; Exasperating if, like me, you’re an impatient person.

Patience vs. impatience. Another way of looking at this – a more African way perhaps – was discussed by Obama in his eulogy of Mandela when he invoked and tried to explain “Ubuntu.” Obama worked its derivation as “the tie that binds the human spirit.” Non-violence, shared understandings, a sort of political Zen.

Mandela was the placeholder when South Africa’s apartheid ended and so he will be historically credited with ending it.

But the fight against apartheid in South Africa had begun in the 1700s, and the list of crusaders probably exceeds the population of most South African towns, today. It is so right that we should so wonderfully honor Mandela, but his accomplishments in this age of impatience are not without flaws.