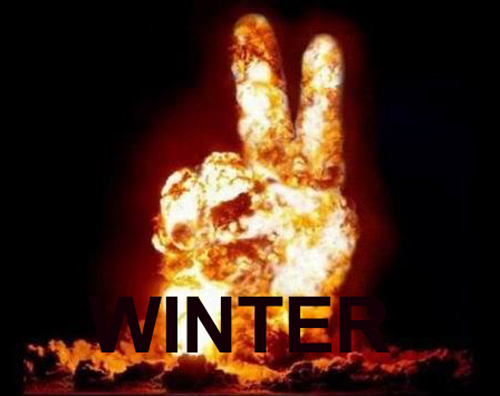 The great revolutions that toppled dictators and promised democracy that rang throughout Africa are all but dead. Winter has arrived.

(Look sideways at the similar current outbreaks in Thailand and Cambodia and it seems their future is similarly doomed.)

I’m more sure of the reasons that didn’t contribute to the failure, then completely understanding the failure itself. The reason the Arab Spring didn’t succeed is not as NPR’s continually inept Ofeibea Quist-Arcton reported Friday on NPR’s Morning Edition.

Quist-Arcton’s simplistic notion that a “lack of leadership” explains why the Arab Spring became Winter, or because institutions have been so poorly formed, is wrong.

It’s the same simplistic analysis proffered by such beacons of intellectualism as Fox News.

And this analysis concerns me greatly, because implicit is that the original movements towards democracy, as modeled after us, were undeniably correct and failed not because of some fundamental problem in theory, but in practice.

That’s simply not correct. The elections in Egypt, Tunisia and earlier, Kenya, were in most regards more transparent and fair than in many places in the U.S. The transitions that ceded power to those who had won were as smooth as our own.

Contrary to Quist-Arcton’s central point, the leadership that took over was decisive and bold. While it’s true there was a threat in Egypt of renewing an executive power dictatorship, it had not yet happened. During the short time Morsi ruled, there was more positive transformation in Egypt’s poorer areas than ever before albeit at the expense of the more vocal middle class.

And that’s problematic policy. But it is not a “failure of leadership” or of “institutions.”

I still believe in the ballot box and democracy, but clearly it didn’t work in Africa. In trying to explain Egypt’s remission into dictatorship at the time it happened, I published a favorite cartoon of mine where a student replies to a teacher’s question, “What is democracy?”

“Democracy,” the student quickly explains, “is the freedom to elect our own dictators.”

We need add that the implementation of those dictators’ policies came through powerful government institutions that were working very well.

Tunisia and Kenya are unique examples in the Egyptian mode, but both have slipped into old ways where like Egypt it seems only heavy-handed authority can achieve enough social stability to do anything. And then, if the authority is beneficent, good happens. If not, bad happens.

1. Democracy can be used to end itself.
2. The start of democracy (the “revolutions”) is never democratic.

Morsi may indeed have been trying to dismantle Egyptian democracy completely, yet he was the most freely elected Egyptian leader ever. And the movement that gave rise to his ascension – the Tahrir Square uprising – was nevertheless a minority of Egyptians. They were notable for being only on the fringe of violent overthrow, but their toppling Mubarak was hardly democratic.

Hardly a few weeks after Egypt’s experiment in democracy failed, the remaining holdouts for hopeful change in places like Mali, Zimbabwe, Rwanda and Ethiopia crumpled away.

Africa is today less democratic, more autocratic; less transparent, more deceptive; and far less promising than five years ago. It has tried and failed with democracy.

Singularly important for ourselves and all functioning democracies was that we and our political brothers refused to sanction that undemocratic removal of democratic regimes.

Intellectuals throughout the western world condemned Obama and other leaders for failing to punish those who ended the experiments in democracy.

Because, I suspect, a leader knows when a leader isn’t. Our leader is just too afraid to level with us.

My eulogy for the Arab Spring was published last month. But my sense that the problem wasn’t democracy, but rather capitalism, I explained months before the military deposed Morsi.

It was in May or even earlier that things around the continent began to look shaky. And the tremors were economic at the time, not political.

The failure of any political system is generally measured by its economy. The economies of Africa under the new democracies were capitalist structured, many virtually built by America and its allies. They didn’t work.

Arguments that it was just bad timing, that these political revolutions came at the end of a world recession and would have succeeded in good economic times disregard the fact that places like Kenya were seeing 7 and 8% GDP growth. So this is not a true presumption.

I know no more than the simple fact that capitalism did not deliver the promise held in democracy. Economists will now have to explain.

Clearly, winter has arrived not because of simplistic notions about the poor implementation of a treasured form of government, but because of flaws either in that system to work capitalism, or in capitalism itself.