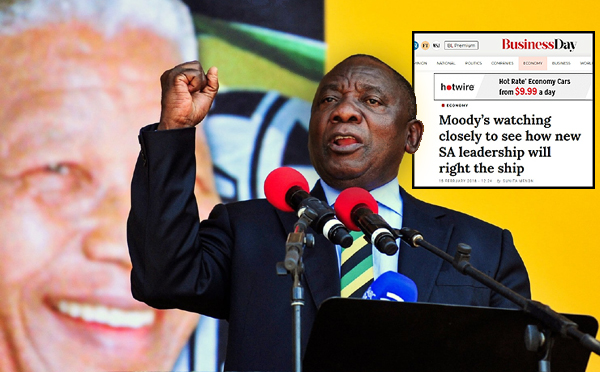 2018 was a sobering year in Africa: Human rights and democratic freedoms declined. It was hard to find much hope.

There were a few places, though, and South Africa especially may be showing us and the rest of the world the way out of this darkness. It’s very African: patience pays.

If asked today how long Trumpian political chaos and depression has been around, many Americans will say for far longer than the less than two years in which the man, Trump, has been in power. Brits think their Brexit struggle has been going on since the Tudors came to power. French analysts are talking about Robespierre.

Bad times have a way of extending themselves into the past. The “seeds” of everything that’s right now wrong are suddenly remembered in the sunlit streets on which everyone was dancing long ago: “If only we had realized it at the time.”

Be that as it may Africans are masters of looking on the other side of the reflection and not beating themselves to death with it. Sometimes when a hard winter blankets the fields with snow, you just have to wait for spring and the flower to open on its own.

It’s spring in South Africa… That was what happened when the era of Jacob Zuma ended in February with his resignation.

Some South Africans think that Zuma still has enough power to resurrect himself. I don’t think so. The country is doing pretty well. Deft moves made by the government to Trump’s devastating trade policies paid off: the recession was the shortest in history. The Rand has stabilized. It’s the economy, stupid, and given the tremors in world economies all around them I don’t think South Africans will gamble much with their current government, despite the bluster.

So if the Zuma era really has ended, what does it tell us and the rest of the world?

First of all Zuma was among the first crazies to come to power. He preceded LePage of Maine, Ford of Toronto, Abbott of Australia and all the more recent crazies in Austria, Brazil and eastern Europe. He really was the first unbelievable of many forced later to believe.

Zuma’s reign foreshadowed them all:

He came to power completely unexpectedly on a wave of populist sentiment. His quirky (Ford) lifestyle (he was proud of 12 wives), his talking without thinking (LePage) and his incredible narcissism is Trump to a T.

He achieved power because he was patently unlike his old school opponents.

Such contrast alone wasn’t sufficient in the past, a past of far less severe income equality, fewer impossible government promises and less frightening globalization. But given those conditions, Zuma was ripe for the picking.

Once in office, he quickly spread the largess. Nothing had to be dished out to his base; the base was too easily manipulated to require a real bribe. All Zuma had to do was assure them they were his main concern.

The largess went to family and billionaire supporters. Over time it became laughable. He stole government funds to build a mansion – a huge palace, really – that was rarely used.

The moral and upstanding government of South Africa went into almost immediate action against its president, very much like Democrats are doing now and Mueller has been doing for some time.

Then all the machinations began: one prosecutor after another fired, replaced then fired. Heads of departments got entangled in legal difficulties.

The point is that it took time for enough of Zuma’s base to erode. He was unassailable with the staunch minority that put him in power. When itty bitty bits of that minority began to determine (1) that he was rotten and that (2) he hadn’t helped them an iota, the throne cracked.

Then the real fight began: government institutions against private power that flourished under Zuma, either because he dolled them wads of cash or left them unregulated, or both.

But it happened: A year before Zuma’s term of office expired he resigned. The pressure came from the elected officials in his party who felt the crazy minority constituency backing off their support.

There are other less dramatic but equally significant events including Kenya’s continued roll towards progressive policies and Ethiopia’s startling twist out of autocracy.

But here’s the bad news. Zuma was reelected and serving his second term when he resigned. He was in power for 9 years.

If you believe in any kind of basic government, you must understand that things move slowly. A bill passed or not may not have impacts for years. It took 9 years until enough supporters of crazy Zuma backed off. I’m not predicting that will happen in America. I’m just reminding you that if you also believe in truth and justice, it will come around. Africa’s the proof.