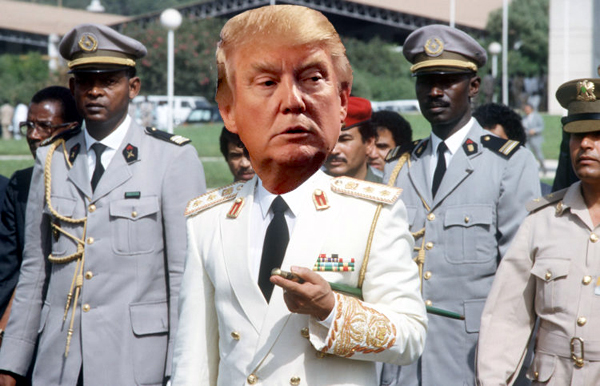 Many Africans view 2018 positively, a time when autocratic leaders solidified power and stability increased. For many African conservatives it was a good year.

It was not a good year for African liberals, human rights activists, members of the LGBT community, women or those who champion democracy. Rightists celebrated; leftists wept.

New African dictators rose to power, old ones grew even more powerful, and left-leaning African politicians suffered for the same reasons this situation prevailed throughout much of the rest of the world:

Rightist, populist regimes have always re-enforced one another, but it was terrifying for me as an American who has spent much of his life in Africa to witness that dynamic this year on a continent which until only recently has been moving aggressively towards progressive democracy.

The moment of clarity for Africa came in January at Davos when Trump went out of his way to specially greet every African strongman and dictator who attended. Returning home dictators like Rwanda’s Paul Kagame and Uganda’s Yoweri Museveni touted Trump’s support as they stepped up the jailing and suppression of even more opponents than ever.

Today, for example, Mitch McConnell prevailed over serious opposition and thrust an evangelical crazy to Kenya as our new ambassador.

(Note of Importance: The opposition to Amb. McCarter crumbled when Illinois Senior Senator Dick Durbin voted for the appointment. McCarter is from a very influential Illinois family. That seems more important to Durbin than LGBT rights in Kenya.)

Zimbabwe’s new ruler, Emmerson Mnangagwa’s dosey-doe with democracy in 2018 ended badly for human rights and democracy advocates. The thunderBolton announcement in early December of America’s totally new African foreign policy was cited by the new Zimbabwean dictator as he shed the last vestiges of democracy and solidified his power.

John Bolton’s policy statement was pretty clear: America is retreating from Africa: Fewer missions, offices, diplomats and all aid will require an immediate quid-pro-quo. Such paybacks exclude human rights or democracy projects, and poor old Reagan must be turning over in his grave. The right has crashed right through its own guardrail.

(Note of Importance: A few days after Bolton’s announcement the lame duck Senate Foreign Relations committee, composed of many chagrined and repenting Republicans who were retiring, tried to counter Bolton’s policy by specifically demanding democratic moves by Zimbabwe’s government. The speeches were pointless. Not even a resolution got out of the committee.)

But nowhere on the continent did a society turn so radically right in 2018 with almost constant cheering from America than Tanzania.

It was not a surprise. John Magufuli (the “bulldozer’s”) rise to power actually began pre-Trump. One could almost argue the reverse of what this post suggests: Tanzanian rightists re-enforced Trump’s grasp on power.

But who came first and who supported whom the most doesn’t really matter. Throughout the year Trump officials paraded through Tanzania supporting the most Draconian things, such as when Interior Secretary Ryan Zinke held a friendly conference in Dar-es-Salaam to undo years of conservation in the Serengeti, actions that could be illegal under CITIES. This came after Norwegian diplomats were expelled from the country for promoting LGBT rights.

Zinke then toasted with champagne the new American lion researcher he helped install in the Serengeti: direct from the NRA.

The Bulldozer unlike Trump has actually been cleaning the swamp, and that’s given him understandable popularity. But all his actions are predicated on non-democratic authority, and America has encouraged him every step of the way.

When several journalists and human rights activists were killed, kidnapped or disappeared this year in Tanzania, America remained mum spiting European requests to join a western coalition supporting Tanzanian progressives. Some who were kidnapped were foreigners, situations not so dissimilar to Khashoggi’s murder.

As often happens at the extremes Magufuli almost lost control of his own movement in November when the even more rightist governor of Dar-es-Salaam announced a round-up of gays in his city. To his credit it seems that Magufuli might have actually stopped this.

There is method and purpose to the dictator Magufuli’s regime wholly lacking in the chaos of the Trump regime, and that’s chilling for those looking for a more democratic Tanzania. But the point is that each seems to be supporting and increasingly relying on the other.

Finally just a few days ago a protest movement in one of the oldest and most autocratic of African countries ended badly for reformists. What started in The Sudan was very similar to the genesis of the Arab Spring in Egypt and Tunisia, but there was no proactive America or Europe around to fuel the fires of hope.

So instead, Sudan’s hundreds of years of autocracy grew stronger than ever.

No fantasies that the Arab Spring was a success, but it was hope. And in 2018 across the continent as a whole it was hard to find any hope. There was one place, though, and it might just be showing the whole world the way out of this darkness. I write about this, Monday.