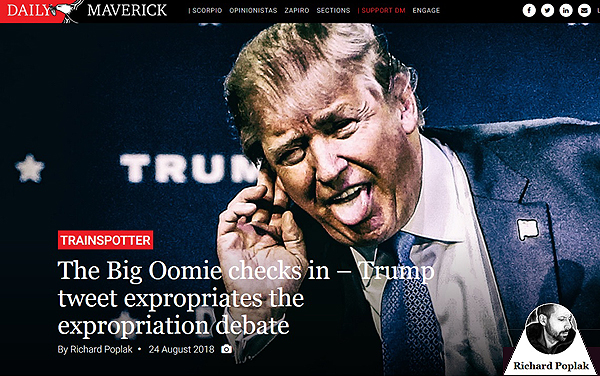 With so much lying, offensiveness and stinging vulgarity… plus so many unbelievable social distractions and political bombshells, it’s hard to recognize a point of danger or a point of hope. Africa’s current affairs are little different than most of the rest of the world, so 2018 blurs into this miasma the moment you focus out of any single event.

But we’ve got to try to make sense of it all, clear the fog and figure out where we’re at. Africans especially can help westerners manage this confusion, and the first thing to understand is that nothing less than an exercised spirit is going to get us home.

Even the most successful, articulate and sophisticated African is likely to harbor despair unfamiliar to a westerner. This isn’t just racism or other universal injustices. It’s the reverberation of panic that attends sudden change.

Quick, surprising and often then disappearing events govern modern African history. Just putting together the story of The Congo’s last 150 years, for instance, rivals any Egyptian history of thousands of years. Change pummels Africans more harshly and constantly than any of the rest of us: Personally, socially and politically – it doesn’t matter. Every instant is a big bang compared to the relative tranquility of a westerner.

But that’s what the whole world – westerners now especially – are experiencing now. Untangling lies is especially challenging for the westerner, because subconsciously westerners are apt to take things said and events reported at face value. That’s worked for most of their lives.

It’s been just the opposite for Africans. Skepticism isn’t the right adjective: Africans expect to be lied to. Laid on them mostly by Arabs and westerners from the Age of Slavery through at least the Cold War, this expectation of being fooled has infected their individual personalities.

It’s one of the fascinating dynamics I see between Africans and westerners all the time. Westerners often complain that Africans aren’t “grateful enough” when truly good things befall them. Why should they be? Nothing seems to end up as it originally seems.

This gross over generalization of “Africans” has value to us panicking westerners right now. Rather than trying to untangle all the lies and dissect presumed inner meanings, just sit back and grant the generalization that the whole thing is ridiculously absurd.

This was done with such skill by South African Richard Poplak recently that I reread his August missive as often as the Auden poems at my bedside:

“Strangely, some mistruths may have escaped the usually dependable scrim of fact checkers and legal readers who ensure the quality of POTUS’s microblogged declarations.”

It’s funny but insightful, unbelievably true and like the dramatic act of an over angered diner thrusting his meal, silverware, drinks and salt shaker onto the floor all at once with a putative sweep of his arm, clears the table for a deep breath and the next moment of clarity.

“In the alt-right imaginarium, ‘elites’ across the world are fixated on wishy-washy do-good liberalism, to the enormous and unfair benefit of black people, Asians, homosexuals, and the organic pet food industry.” (For an explanation of South Africa’s vernacular “Oomie” see the end of my blog on August 24.)

Then, like Africans have had to do for several hundred years, you laugh: it’s just too funny to be real.

“Much like the correlation between racism and beaches, what [is it] about early mornings that so inflames the passions of authoritarian fascists. Trump’s daily Twitter stream famously starts in the very early hours, and one theory is that his early ablutions cause him significant discomfort. (Trump Tower cheeseburgers …”

Humor as a cathartic antidote to despair is a dangerous precipice to arrive at, but sometimes …you’ve just got to let the chortle chime.