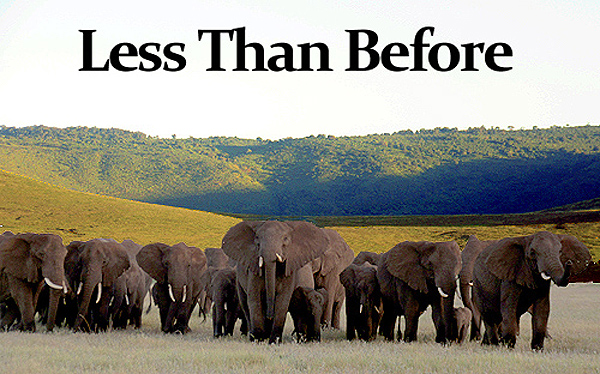 With last month’s reclassification of giraffe as “vulnerable,” and continent-wide surveys last year of both elephant and lion, it’s now beyond doubt that Africa’s big animal population is declining rapidly. This is the #2 story of 2016.

It’s fair to say that lion and giraffe are declining at about 20% every decade, and elephant about half that.

These numbers are at last real science. But they aren’t complete and there’s a lot more to the story.

The science came first from Paul Allen’s Great Elephant Census. The Microsoft co-founder funded the continent wide study on his own, because basically wildlife groups and other NGOs were unable to work together to manage such a broad census possible.

It took a white knight, so to speak, and Allen came riding in.

Lately Allen has been personally making some ambitious conclusions about his study, but the study itself is just facts, few conclusions. The one glaring failing is how much of the continent was not included in his survey.

Elephants in particular range far and wide beyond the protected boundaries of national parks which was what Allen studied. Nevertheless, it was at last so wonderful to have actual uniform statistics on a matter that has drawn so much attention for so long.

A very important note is that elephants – like all the big game animals – are not uniformly declining. Another great contribution by the Great Elephant Census was to point out many areas in the continent where there are too many elephant, or more exactly per the study language, unusually high density. In Tanzania’s Tarangire national park, for example, elephant numbers may be alarmingly high.

Before the eminent lion researcher, Craig Packer, was so egregiously booted out by Tanzanian authorities last year (after nearly 30 years of working there), he was carefully compiling statistics that documented the sudden decline in lions.

It began with his own simple observations in Ngorongoro Crater where over the course of a decade he documented nearly a third decline in lion numbers.

Packer has since been supported by a number of other researchers and organizations: it’s now indisputable: lions are in trouble.

And so are giraffe. Not the 40% decline scandalously reported in an interview on NPR recently, but significantly a third of that.

The decline in giraffe actually snuck into science on the tails of very compelling and exciting research studying not their numbers but their DNA. That remarkable study proved that our current taxonomic divisions for giraffe are wrong, and that there are four separate divisions, each which may be an entire animal (species) onto itself!

It was interesting that even those incredible scientists didn’t at first realize how important the raw numbers data they collected was. No one thought giraffe were in trouble.

My own observations on safari bore out these serious predictions about big animal decline. I found myself asking for the first time in forty years, Is it really coming to an end?

It isn’t just animals. African birds are in trouble, and in fact the changing behavior of some birds gives us a precious clue as to why the biomass is in such decline:

Climate change. I personally witnessed dramatic effects of climate change when guiding in Alaska and Africa. When food sources are eliminated by droughts and floods, the whole food chain withers on the vine.

Another reason for the big animal decline that piqued my attention is hunting. This was the year my slowly evolving attitude towards sports hunting changed definitively.

Among those citing hunting as a significant contributor to big animal declines is Craig Packer. He lost his situation in Tanzania because of his October publication to this effect. The world’s most important, successful lion researcher was dumped by the “sports hunting lobby,” which in Africa rivals America’s NRA.

Did you note what’s missing? Poaching. Of course poaching effects animal populations and last year especially with rhino and to a lesser extent elephant in very small areas of the continent. But other than in those highly qualified and relatively small areas, folks, poaching isn’t as important a driver of decline as climate change, human/wildlife conflict or sports hunting.

WWF and NatGeo should have known this before I did.