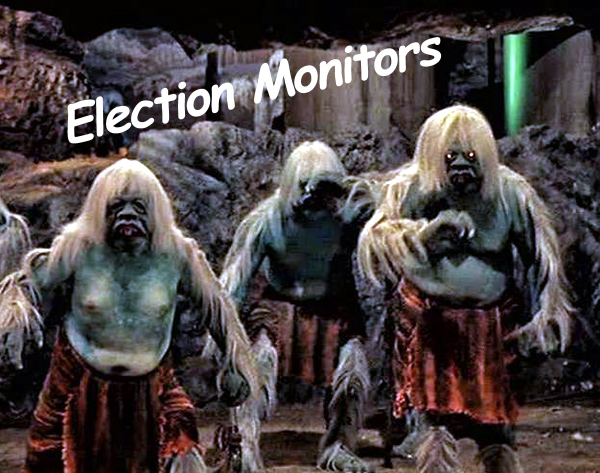 The top story in Africa in 2016 is “The Election:” Mali, The Gambia, South Africa, The Congo and elsewhere like the U.S. The “story” isn’t simply who won or lost. The “story” is that elections aren’t working: they are not manifesting the will of the people.

Trump is the quintessential example, but I want to examine the African experience because I think it provides very important insights into exactly what’s going on.

Dictators are not good for society with one occasional exception: stability. The long-running regimes of dictators in The Congo, Angola, The Gambia, Chad, Cameroun, Uganda, and until recently Malawi; and previously long running dictatorial regimes in Kenya, Ethiopia, Mozambique and Zambia all had one thing in common: peace.

There were some internal protests, but they were dealt with so harshly that they never gained any traction. The peace they achieved was their singular treasure. It’s why the larger democratic world powers not only tolerated them but supported them.

But under such regimes growth is stagnant, education and social progress is minimal if at all as all the enormous potentials whether from natural or human resources are repressed. It’s clearly not what a free people would choose … unless any change cedes peace.

A strategy of just waiting them out – until a coup replaces them, or an uprising gains traction, or they just die – doesn’t work. Last year in The Gambia the long running dictator actually allowed a democratic election, lost it, graciously conceded to his opponent and started to pack his bags to go into retirement.

But Gambian military and business leaders, even former potentates some even religious all said to him: Hey! Not so fast! So he changed his mind to preserve the status quo of the minority.

A similar situation happened in The Congo. Once entrenched, dictators cannot be ousted by an election unless the peace they have procured is lost. In 2016 Africa proved that democratic elections won’t manifest the will of the people in these situations. In fact, dictators use these turning point elections to validate themselves until the next time round they simply stuff the ballot boxes.

Africa’s “free elections” infect western elections with their failures. The Mali government currently depends entirely upon the French military. French and American forces “liberated” the country from jihadists last year (after French and American forces chased disparate Islamic militants from all over the continent into Mali several years ago). Why liberate Mali? To preserve freedom and democracy, so France promptly arranged an election.

Mali’s hopelessly chaotic “democratic” election in November was a joke. Polling stations blew up, most ballots from The North were never counted, and most Malians had no idea who they were voting for. The French authorities in control were simply window dressing their regime with black faces.

But here’s the kicker: The Mali election failure and the growing human misery there has become a primary issue in France’s own elections.

Very much like Trump’s boasting he’ll nuke ISIS to defeat them, the French now wonder whether to nuke Africa or tuck tail. Problem is, of course, neither option works and most Frenchmen know this, but their understanding has no political champion in the current campaign.

Nuking or tucking tail will both result in failed policies. You can’t nuke without cleaning up (unless you’re truly Darth Vader). If you tuck tail all hell breaks lose, more refugees flood into your borders. Both strategies result in failed policy. (It’s just one of many contradictions that plague conservatism.)

Africans knew long before Americans or westerners what was happening with elections this year: people are really fed up. They tried “change” and it didn’t work, so they’re ready to vote “upheaval!”

“Conventional wisdom holds that a known devil is better than an unknown angel,” wrote Ugandan intellectual, Yash Tandon as he surveyed the meaning of elections today, particularly in America.

Earlier a Kenyan suggested that a Trump-like candidate in Kenya may be needed: “With so many unemployed people, endemic poverty, extremes of corruption and tribalism imbued in the social fabric of the society it [may] take a populist to cause societal upheaval.”

And a South African summed it up:

“This entire year was a sort of lengthy ode to the collapse of meaning,” wrote Richard Poplak from Johannesburg.

“The algorithm-forged, clickbait inanity that has come to define our Brave New World” simply means that electorates will vote out the establishment and nothing else matters. There are no issues but “Out With You!”

So-called democratic elections in 2016 in Africa like in the rest of the world didn’t work. They were ignored (The Gambia, The Congo), brought minorities not majorities to power (Mali, South Africa) but above all never reflected the views of the people who could vote. The people seemed to know this beforehand, so they cast nothing more than protest ballots.

This is a big story and not just in Africa. The way the world chooses its leaders is changing.