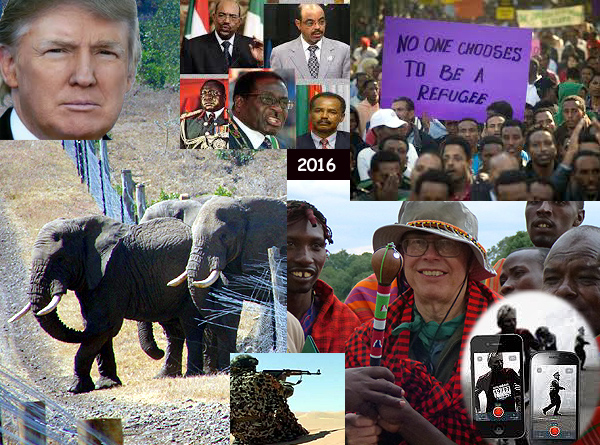 Trump dominated the news in Africa in 2016 in so many different ways, including expectations and predictions that were much more correct than those made in America. Had Trump not been around, the top news would have been the finally substantiated science of massive declines in Africa’s big animals. Many important events like this were eclipsed by America’s election.

Return in the next several days for more in-depth discussions of these stories. Below is the summarized list:

#1 ELECTIONS SURPRISE
Not just but dominated by Trump. Surprising elections and other political events occurred throughout the continent, as they did in Europe. The net result is a much more conservative continent with more entrenched dictators, clamps on free speech and generally retrograde politics.

Mali, in particular, raises again the value of western democracy in rapidly developing societies like in Africa. Russia pounced on this, rapidly making new alliances with many African countries and joining forces with some of the most important ones to dismantle United Nations’ and other global institutions like the World Court.

Examining the politics of Africa, and Europe and elsewhere, makes us realize that Trump is not an unique phenomenon. It’s happening round the world from the poorest to the richest, suggesting that wealth inequality is not the issue, but more likely wealth [and other] disparities.

#2 BIG ANIMAL DECLINE
There have been many Peter-crying-wolves over the years, especially many “charitable” wildlife organizations begging for donations to stop extinctions. There’s no dispute that elephants teetered on extinction in the 1980s, so the appeals weren’t far-fetched just exaggerated and overly emotional.

In part this was because there was no real science to substantiate the claims of impending extinction. Last year this changed. Science has started to prove that Africa’s big animals really are in decline, but not uniformly. There are many places where there are too many big animals.

The science confirms that the fate of Africa’s large animals rests entirely with Africans, not the World Wildlife Fund or Save the Bimbo. Only Africans will decide whether to have more concrete factories or elephants.

#3 ENTRENCHING DICTATORS
Jacob Zuma, president of South Africa, is not quite yet a dictator but it’s getting awfully close. Throughout the democratic South African system, though, from the judiciary to the legislature Zuma’s flagrant and increasing exercise of anti-democratic powers is being given a pass.

In Uganda and Zimbabwe, long serving dictators that only a few years ago seemed threatened are now stronger than ever, despite increasingly violent protests against them. Dictators that publicly expressed interest in ending their reign found themselves reversing their inclinations in The Gambia, Guinea and Angola, possibly because in today’s world democracy is feared more by the populace than authoritarian rule.

This is a rather rapid reversal of a decade or so ago, and obviously correlates with conservative movements found around the world.

#4 REFUGEES & IMMIGRATION
2016 was not a nice time for people fleeing one society for another, including in Africa. More than 65 million people are now managed in refugee camps by the United Nations, essentially the world’s 21st largest country broken up into hundreds of pieces.

But whether it’s the “progressive” mayor of Johannesburg or the new president of the United States, there’s little sympathy for these people. They’re painted as criminals and miscreants as the world increasingly retracts into a thousand separate cocoons.

#5 FAKE NEWS
& CELL PHONE JOURNALISM
Fake news is a trendy new topic in the U.S. but it’s been a central argument in African politics for some time. Remember there are more cell phones per capita in Africa than in the U.S. The speed at which events are disseminated gives lies and inaccuracies a facade of truth.

Over a wide spectrum of African societies leaders are starting to aggressively deal with this. Dictatorial regimes like Uganda and Zimbabwe are mining social media rather than censoring it as they had in the past, in order to punish opposition. More democratic regimes like Tanzania, Kenya and South Africa are moving towards legislating various kinds of censorship.

Ironically, of course, censorship won’t work in such a hi-tech world where shutting down WhatsApp simply opens up Twitter. Does this give advantage to the dictator? Are governments inherently limited to punitive responses to fake news?

#6 DECLINE OF TERRORISM
& THE RISE OF GUERILLAS
The high profile terrorist incidents in Europe in 2016 accomplished exactly what the terrorists wanted: The public believes terrorism is on the rise, when in fact, it’s massively declining.

There used to be a dozen significant terrorist attacks throughout Africa for every single Brussels airport bombing. That’s not happening, anymore: This is precisely because terrorists have been defeated on their home turf.

What we’re seeing are the last gasps of desperation as terrorism collapses. Problem is that it will never be wiped out completely. If a Finn can terrorize a Boy Scout camp it means that there’s no place in the world where terrorism will end.

The change is that it will no longer emanate from quasi states or organized rebel movements but rather from mavericks and guerrillas decamped to the desert.

#7 HONORARY MAASAI
This entry certainly has little impact on the world, but my being named an honorary Maasai elder by Maasai leaders in Kenya’s Mara Province is an honor I’ll always cherish.