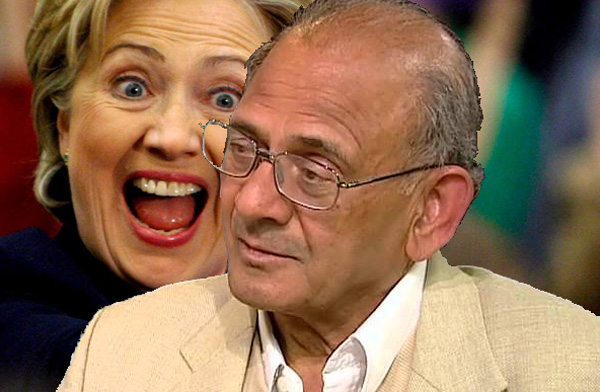 African intellectuals bring clarity to our current campaign: Nothing matters in this election but Establishment-Yes or Establishment-No. Obama’s failed promise of change makes any qualification heresy.

Clinton and the DNC’s very public decision not to indict Republicans, thereby reducing Democrat’s chances for a legislative majority, suggests nothing less than stale embrace of the Establishment, and by so doing, boosts Trump.

Yesterday a Kenyan. Today a Ugandan.

Ugandan intellectual, Yash Tandon, responded yesterday to the outcry throughout Africa against Trump by asserting, “Trump as an unknown devil is far better than Hillary Clinton, the known devil…Clinton is part of the Establishment.”

Coupled with Robert Reich’s current crusade to remind voters that the Clinton campaign and the DNC have publicly announced they will not link Republicanism with Trump… one wonders if Tandon is right.

“It is part of [Clinton’s] inheritance to provoke wars and control the system in league with global corporations,” Tandon claims almost in the same way that Trump does.

It’s brazen and exaggerated, but toned down into reality it has certain relevance. Tandon believes Clinton’s proclivity to conflict comes from Henry Kissinger, reminding his readers that the architect of realpolitik and the Vietnam War is “very close” to Clinton “ both in personal life and ideologically…. Hillary regards Kissinger as her mentor, her Guru.”

Again an exaggeration, although the record clearly suggests a close personal and professional relationship.

Paraphrasing Bernard Lewis, Tandon believes Clinton embraces Kissinger’s counsel “to fight proxy wars in Iraq, Afghanistan, Libya, Somalia, and the global South – employ agents instead of our own soldiers; manipulate the media to provide “truths” to the masses; use money to buy people, buy governments, buy entire nations; and keep the wolf (read Putin) out of the door.”

“She is the ‘war candidate’ of the Establishment, and has made her intentions amply clear in relation to Iran, Gaza/Palestine, Syria … and if she has her way, Russia and China.”

From the African’s point of view, Tandon is particularly worried that as during the Cold War, the freeze in relations between the U.S. and Russia will result in new proxy wars, the kind that destroyed Somalia and Ethiopia.

“In Trump, the Americans have a Presidential candidate who has gone out of his way to be distasteful,” Tandon concedes. He then recites a litany of references to Trump’s narcissism and other neuroses. “But nobody can deny … that [he is] galvanising the youth who are sick and tired of the yawning divide between the rich and the poor in America.”

He believes London’s Guardian newspaper says it best: “[Trump’s] supporters have been in mourning for a lost way of life… They yearn to feel pride but instead have felt shame… Joined together with others like themselves, they feel greatly elated at Trump’s promise to deliver them unto a state in which they are no longer strangers in their own land.”

Tandon says, “The truth is that nobody knows what lies behind Trump’s mask,” but not only doesn’t that matter, it helps him because it is anti-establishment. Tandon links Trump’s appeal to that of Jeremy Corbyn who yesterday barely held onto the leadership of Britain’s Labor Party precisely because of the youth who supported him.

I could bristle at this if those opposing Trump did so with some honesty. Trump is a natural product, even one that was often predicted, from if not the values of conservatism at least its attributes of late that forbid compromise.

Clinton’s and the DNC’s very public and very studied decision not to indict Republicans, and thereby reduce the chances of a legislative majority, suggests nothing else but stale love for the Establishment, and perhaps like those they unwittingly buoy up, suicide as well.