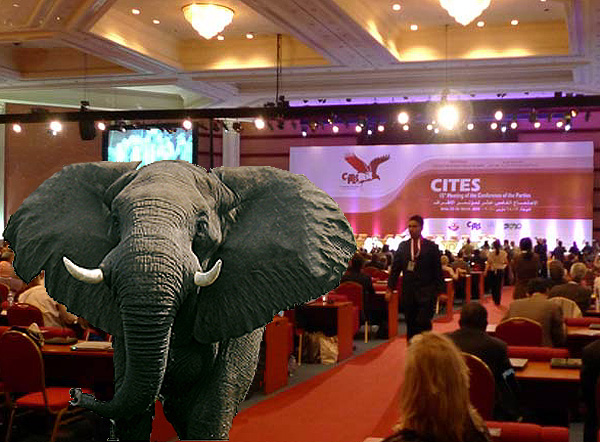 COP17, the CITES treaty working group, is winding down like a firecracker with the biggest boom possibly yet to come. Southern African countries prevailed in a bitter fight to keep all elephants from being listed as imminently going extinct, and the fight over lions begins today.

CITES was absolutely fundamental in saving elephants from extinction 30 years ago. But times have changed. Has it lost its power to politics?

As the world globalized at blinding speeds in the 1970s, black markets burgeoned across the world: markets in currencies and medical equipment and weaponry and … ivory. It was of course illegal to kill an elephant in the Serengeti National Park, but killed they were by the thousands.

By the mid 1980s a half to two-thirds of the continent’s elephants had been mass slaughtered by incredibly organized corporate poaching, poaching that was as sophisticated and hi-tech as the mafias transporting SAMs into war zones. It’s often hard for westerners to grasp this history, because while we all love ivory sculptures they never ranked up there with a Rembrandt.

But they do in China and Hong Kong and Singapore and Indonesia, and Vietnam and virtually all of Asia. Ivory is nearly religious, iconic often tiny and intricately carved beautiful things that were passed from one generation to another for a thousand years.

Kenya had the most to lose in the 1980s. It had lost 95% of its elephants. This western favorite was where mass safari tourism was born. If you suddenly don’t have the biggest attraction in the circus to see?

Kenya sought U.S. help suggesting they use CITES to stop the trade in ivory.

CITES, the Convention on the International Trade of Endangered Species, became a world treaty in 1975 with 80 sovereign members, the brainchild of the mostly western NGO, the International Union for the Conservation of Nature (IUCN).

Kenya and the U.S. were successful. CITES “listed” elephant in “Appendix I” effective January 1, 1990. The proposal was adopted after such bitter resistance from Zimbabwe and other southern African countries that some argued CITES itself was the most endangered species.

But the decision held and, by the way, elephants were saved from extinction. Black markets were significantly reduced and elephant populations rebounded across the continent. By 1997, a mere 7 years, elephants were doing so well that some of the regional populations were “downlisted” to Appendix II.

CITES’ victories include much more than just saving elephants: certain sharks, turtles, apes and rhinos; hundreds of rare trees and plants and hundreds of invertebrates. Because all these specifically saved species by CITES have a reverse domino effect on many other species, it’s really arguable that thousands of species have been saved by CITES in the last quarter century.

But it really all began with elephants. So this week’s fight over elephants heralds back to the treaty’s beginnings. This week’s fight was whether to relist all elephants onto Appendix I. The fight was lost and so many regional populations – especially those in southern Africa – that were downlisted to Appendix II in 1997 will remain there.

From a logical or philosophical point of view, this is extremely esoteric. The effective actions that member governments must take is the same whether a species is in Appendix I or Appendix II. Appendix II does have more exceptions to allow trade than Appendix I, but when you get into that minutiae it really gets weedy.

The creation of these two different appendices is, from my point of view, a political one. So be it, any treaty is political. Remember the government of South Africa has to convince its business sector why they can’t export ivory harvested from elephants in a healthy population that die of old age. The warehouses of such ivory are legendary.

Nevertheless, we need a philosophical RoundUp for what happened in Johannesburg this week.

First of all starting several years ago the battle over how elephants should be listed devolved into a subcommittee that was to define the parameters of the debate by creating a “Decision Making Mechanism” (DMM). Talk about esoteric. Fortunately that effort was resoundingly dustbinned by the convention.

But it wasn’t enough to satisfy the wounded egos of the proponents that all elephants should be put into Appendix I. Led by the Wildlife Conservation Society (WCS) of New York, a resolution was adopted that seemed to soothe some. It produced no effective action or even policy creation. WCS itself characterized it as a “Strong Stand for Elephants.”

So elephants are today considered exactly as they were a year ago and I think that’s right. The extraordinary hype and sensationalism that accompanied the Great Elephant Census has been put to bed. Elephants are in trouble, but that trouble is much more subtle and complex than the simple criminality of the 1970s.

CITES saved elephants in the 1980s. We may need something else to save them, now.