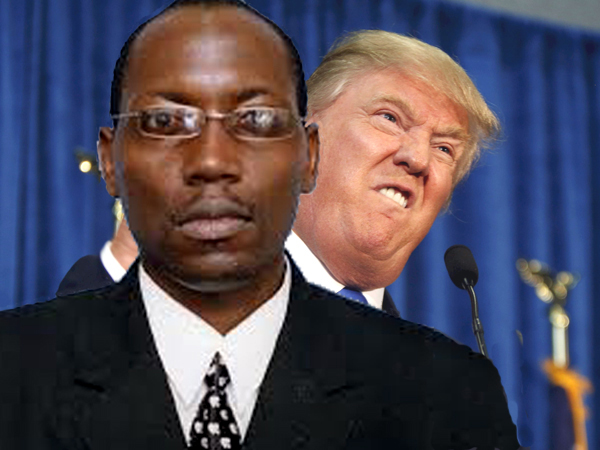 “How can a billionaire businessman who calls Mexicans rapists, …insults women, stereotypes black Americans, admires…Putin, threatens to bar Muslims from entering the country …become a presidential candidate? Surely decent, responsible, fair-minded people would not give such a national and international menace a chance to become the leader of the free world?”

To that South African columnist Donald Trump is as newsworthy as a dozen other crisis in his country this morning and hundreds across the continent.

There’s a lot of news in Africa, today. And a lot of it is about Trump.

Of the dozens of commentaries I’ve read, I think one from Kenya sums it all up. A young financial analyst in Nairobi this morning, calls Trump’s style of being “brash, abrasive, arrogant, racist, sexist” as precisely the reason he won the Republican nomination.

Ikunda continues: “We should be concerned with the dynamics in the American society that … assured his meteoric rise. How come he still commands a sizeable following?”

I often use African analysis as a perspective on America. African thinkers are mostly young, extremely well educated and articulate, and far more worldly than many Americans, so they can provide the global perspective often lacking here.

But this morning Ikunda flipped my role. Trump has had such a profound effect on African thinkers that they are now using us as I wished to use them with one major difference. I’ve viewed much African socio-political thought as forward-thinking and therefore a model for us.

Ikunda views the opposite. Trump, he believes, is an aberration of basic American values which no longer exist in America. Kenya, he thinks, can learn not what to do from America’s values, but what not to do when those values are lost or forsaken:

“Poverty … is providing a spark for intolerance to status quo. In a nutshell [this is] … a sure harbinger for the rise of extremism and … growth of candidates like Donald Trump.”

What’s interesting, of course, is that statistically Americans are 50 times richer than Kenyans. I don’t know Ikunda but I suspect he is pretty well off. What he recognizes isn’t so much certain wealth as the difference between those who are better off and poorer off – the income gap.

American capitalism runs the world. What happens on Wall Street happens on Moi Avenue in Nairobi. While the quantitative differences are massive between the U.S. and Kenya, the dynamics are the same. Modern Kenyan society is more like American society than almost any other on the continent.

Trump rose “with a lot of rhetoric and quick fix solutions some laced with hate messaging. It is easy to sell that kind of theme to people undergoing some form of economic and social malaise.”

“May I take a slight look at Kenya in the same context?” he politely asks his readers. “With so many unemployed people, endemic poverty, extremes of corruption and tribalism imbued in the social fabric of the society it [may] take a populist to cause societal upheaval.”

Are you ready for societal upheaval?