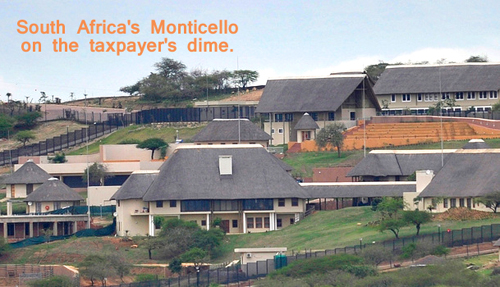 Tolerant, patient South Africans have basically given their leaders wide berth publicly and privately since Mandala stepped down 15 yeas ago … until now. The current president’s buffoonery and corruption threatens the nation.

Working every day under the threat of massive censorship, South Africa’s still vibrant press has systematically reported both the corruption of its government and bumbling of its leaders. But until now it hasn’t seemed to matter much.

Last week the country went ballistic. Even ardent supporters of the government grew critical and those who defended it either lied or blushed.

News leaked that $22 million dollars (203 million Rand) had been spent to build a new home for the current president, Jacob Zuma. This was not the official residence, but a complex built in Zuma’s rural homeland that is not intended for official use.

Zuma is in trouble for a lot of things, and the ruling ANC party will meet in December to decide whether he should continue as president. The recent mining strikes which became quite violent set on edge many ANC members and lessened Zuma’s ability to stay in command.

The rapid building of a new resort home strikes everyone as what it probably is, a wounded politician trying to collect as much as he can before he’s booted out.

The public works minister lied exactly as Romney lied — no holes barred — claiming that the project was in perfect compliance with the “Ministerial Handbook” or rules of governing in South Africa.

It isn’t. The lie isn’t as boldfaced as Romney saying he won’t enact a $5 trillion tax cut despite his own website to the contrary, but it’s almost as clear:

“Although members can designate a privately-owned residence for use as an official residence at the seat of office, the handbook states that the public works department will only be responsible for making available general cleaning services in private residences used for official purposes,” Faranaaz Parker, a reporter at South Africa’s Mail & Guardian explained.

This is the leader, remember, who proudly displays multiple wives and claims that his extramarital sex with underage girls is both legal, and safe from HIV, because he showers afterwards.

South Africans have tolerated this buffoonery for too long. The patent misuse of public funds to create Zuma’s golden parachute into a resort paradise is a tipping point, and brings into sharp focus the ongoing corruption of the ANC.

That corruption manifests itself principally by the awarding of uncontested government contracts. Several days ago the BBC interviewed a whistle blower who had been fired from the administration of education in Limpopo for revealing that millions of dollars allocated for the purchase of text books had gone missing.

The report caused such a stir including threats against the BBC that yesterday the BBC published an even greater in-depth story further documenting more than $2 billion dollars gone missing in South Africa’s school system.

The textbook scandal might be the one that penetrates the ennui of so many South Africans to their incompetent government. Protests are growing.

But the textbook scandal is only one of many such examples of illegally awarded government contracts.

Perhaps most disturbing is that South Africa’s much revered independent court system is being emasculated:

In one of dozens of similar cases, the Gauteng Provence High Court nullified a $1.1 billion dollar ( 10 billion Rand) government grant in August to middlemen dispensing social security payments. It was a bold move when the judge declared the award “illegal and invalid” but a lot less bold when he refused to “set it aside.” In South African jargon, that means it’s wrong but nothing will change and implementers will not be held accountable.

It is typical of the massive transformation of South Africa’s previously powerful courts into platforms of ANC control.

I don’t know if this latest scandal really is the tipping point of ANC power, and the ANC is being extremely clever by floating the idea they will get rid of Zuma before the control boils over.

But I do know it’s a tipping point for something.