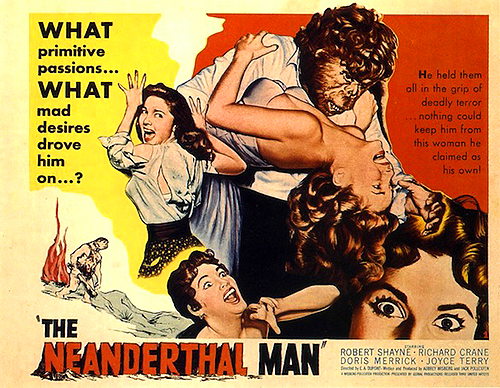 Animus in our culture is pervasive and not just in politics. Recent awe-inspiring discoveries about Neanderthals have enraged the Right, once again.

The various emotions I feel following the Obama/Romney debate are complex, but all so similar to the same emotions provoked by the angry outbursts of creationists over new and exciting Neanderthal discoveries.

Harvard and the Max Planck Institute have been meticulously studying the DNA of Neanderthals for several years, now. Discoveries understandably come out allele by allele, and this week they announced a real breakthrough:

Neanderthals interbred with modern humans a lot more than previously thought, and the two sub-species likely lived peaceably side-by-side for tens of thousands of years. The “disappearance” of the Neanderthal was not a wipe-out by a more warring subspecies – us – but likely assimilation by romance.

As much as 4% of modern man’s DNA is Neanderthal, and that’s incredibly significant. Recent studies also confirm that modern Africans carry less Neanderthal genes than non-Africans, and along with other microbiology and genetics, further confirm relatively stable Neanderthal assimilation into our current species, rather than anything more dramatic.

Regrettably, I now concede one of my most powerful stories given during my lecture at Olduvai, where I wow my clients with the notion that we (homo sapiens sapiens) might have eaten the Neanderthals up!

It was a great story and a plausible notion for years, and the wow came not in some Carl Sagan notion of our intrinsic animus but rather that the Neanderthals, while “smarter” (their brain/body ration might be larger), they lacked something “we” had that allowed us to conquer them. For many years that was presumed to be better language.

The possibility that most of our direct African ancestors were capable of a better manipulation of language than Neanderthals has become more contentious over the years, but it’s not yet fallen from complete grace. So until recently it was a wonderful notion that language trumped IQ.

I concede, but there are enough wow moments in the evolution of man that, other than having to redo my lesson plan, I still have full faith in the energy of the lecture!

But not for creationists. The recent discoveries have just angered them, further.

A couple weeks before the Harvard/Planck study was announced, there was new archaeological evidence that Neanderthals were peaceful, and separately, that Neanderthal decorated himself with bird feathers.

That was not so profound from my point of view, but the creationists went ape about it:

“More breaking news from this week about Neanderthal man, they found feathers in his living arrangement and it was not there by accident rather it was there by intelligent design!”

The quote above is from one of the leading creationists. Take a minute to scan all the recent posts under his rubric of “archaeology” and you’ll collect his enormous animus.

You’ll note reference after reference about science’s notion of Neanderthal as an oaf. When quite to the contrary, for years there’s been nothing in scientific discovery to suggest Neanderthal were less smart than us! In fact, if the brain/body weight argument regains traction, it can be plausibly argued they were smarter!

This creationist isn’t a god-fearing man displaying disdain or arrogance about science’s mistakes about the heavens. It’s an animal filled with anger. And it brings me back to the Romney/Obama debate, because the collection of emotions are similar.

Truth matters. In fact it apparently matters so much that it creates anger in those who deny it. And when that anger is sufficiently mobilized by celebration, the dynamic begins to be powered by less, not more, truth.

So just say something again and again that is a lie, or claim you don’t believe something you do (or once did), and you’re right on the same squad as Darth Nader, denying the truth and somehow remarkably gaining energy from doing so.

And at this point rational debate goes to pot. Evil trumps good.

We ought to take some lessons from our early ancestors. There was less animus and more romance than we ever thought possible.

Is this Obama’s secret? But will it win the House?