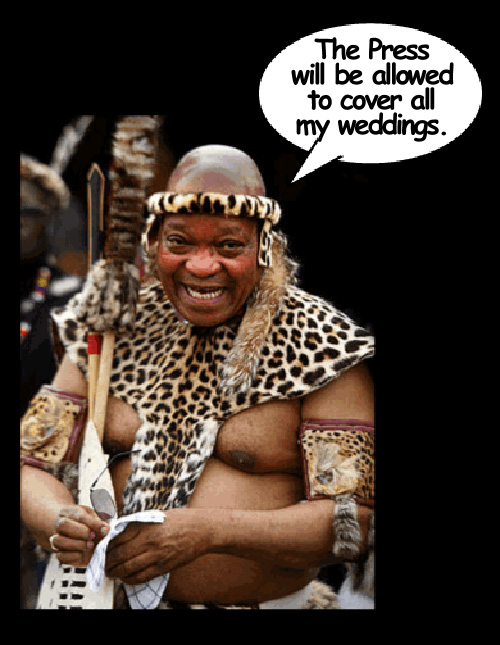 More wives and less freedom is the trend in South Africa as President Zuma marries for a fourth time and a draconian government secrecy law moves through the parliaments. There is a chilling connection.

The press is all abuzz with Jacob Zuma’s marriage this coming weekend to a prominent businesswoman with whom he has a 3-year old child. Zuma is 70 and Bongi Ngema-Zuma is 25 years his junior, as are his other wives. He is reported to have more than 20 children.

Zuma’s fun and games with traditional Zulu culture don’t mean much in themselves. He does receive about twice the amount of “presidential spouse allowances” that his predecessors in the presidency took, but technically there is no official position in South Africa – as in the United States, for example – for a “first wife.”

His romantic dalliance is mostly stuff for cartoons. South African family law allows for only one union, but recognizes traditional marriages as well which through private business contracts can then achieve legal equivalency with federal marriage law. It’s not known if Ngema-Zuma or any of his other wives has a contract with him.

I think it fair to say that the vast majority of contemporary Africans think Zuma’s behavior mocks rather than celebrates traditional Zulu customs. “It is ludicrous that things such as this still happen in a world that is changing!” writes Nigerian blogger, Yomi Akinsola.

But I see something more onerous in Zuma’s antics, and I think it fair to call them “antics.” Stripped of Zulu life ways, Zuma’s behavior is not so dissimilar to legions of dominating personalities with multiple sexual partners around the world. The difference is that his is totally above board and validated in current South African society.

Who cares? Lots of people who have tracked the decline of polygamy as societies evolve and prosper. Polygamy as the highlighted folkway Zuma has made it is socially regressive.

And I think intentionally so and it leads to a much more powerful issue. South Africa is slipping back into an apartheid mentality.

The ANC freedom fighters who have controlled the country since 1993, Mandela excepted, sort of anebriated themselves in traditional lifestyles that they – and their parents and grandparents – never engaged in. A sort of mixture of Bronx cheering the old Boers and celebrating majority democracy, flaunting the presumptive apartheid theory that native South Africans were too primitive to run a modern society.

But these guys are having trouble accepting modern democratic principles. They passed a draconian secrecy law last year that is awaiting endorsement by South Africa’s provinces. While not a slam dunk, it’s likely to become law, and then likely to face aggressive court challenges as unconstitutional.

When it becomes law South Africa will attain the unique position of a so-called democratic state controlling the press as much as China does. And there’s a reason that these so-called traditionalist ANC leaders want this.

The press has ferreted out the most scandalous and criminal acts of these old guys imaginable. The list exceeds simply the largess of government no-bid contracts dished out to their families and supporters, to government policies based on the belief that AIDS is not a virus and bribing judges involved in their criminal court cases.

Playing Zulu king is a tactical diversion from these more important issues that vies for column inches in South Africa’s dynamic media and so tends to lessen somewhat the anticipation of horror that passing this legislation naturally evokes.

But even more important than that, regressive legislation identical to apartheid culture would be a hard move over current South African culture … unless “everything old and traditional” suddenly appears good. Sort of mix up the bad of the past with the good of the past and just take the past.

I really don’t think this is a stretch. It’s intellectually offensive when detailed like this, but when streamed through the every day life of South Africa – which by the way is pretty good at the moment – it’s the bitter pill in the coated honey.

Intentional? I don’t think Zuma sat down with his personal coach and asked him how he should behave personally to pass the draconian press law. But with time as his cultural critics tended to line up with his political critics it became rather self-evident.

The Zulu King holds the power of life and death over all his subjects. Zuma’s not quite there, yet, but he’s trying.