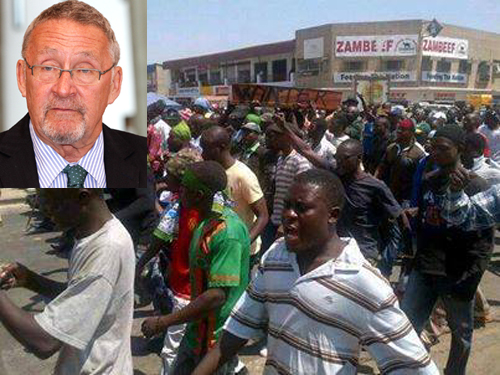 This morning two countries just above South Africa are suddenly and surprisingly tense. There is potential for serious violence in Zambia and Zimbabwe.

Other than that both countries begin with the letter “Z” there’s little else at first glance that seems similar about them beyond sharing the Zambezi river as a common border. But I think the sudden climate in each reflects a connection between them we didn’t realize before.

In a nutshell the problem in Zambia is the sudden death of its unusually popular president and the ensuing power struggle that includes the completely unexpected if remote possibility that a white man will come out on top.

In Zimbabwe nothing can be explained without Robert Mugabe, and the old and clearly sick dictator is being besieged from all sides: his party, an ever resurgent opposition and … even his wife.

Both situations have resulted in near lock-downs of their capitols. Clearly, violence is developing.

“Violence will never be the answer,” was the lead editorial in Zim’s ruling party newspaper Friday. Which, of course, means it will be.

In fact, the ruling party stoked the flames a few paragraphs later by stating, “…violence in crisis areas is not pushed by ideological pundits, but criminals hiding under a political or religious umbrella.”

Convoluted as usual by a lack of proper diction and reason in equal measure, it’s still quite clear that Zim’s ruling elite is getting a call to arms.

“Lusaka is in lockdown mode as most roads are closed today and tomorrow” ostensibly for the funeral of the recently dead president.

‘Who Cares?’ the first comment following that report today in one of Zambia’s main newspaper goes on to ask, pointing out that what really matters is “what is happening at the parliament gates,” i.e., the succession fight.

The sudden death of a popular and powerful leader in Zambia, and the apparent final demise of a decrepit and very sick old dictator right next door, are happening in tandem. Is this just all coincidence?

Well, probably, but I’ll tell you my imagination might not be completely to blame here. The current Acting President of Zambia is Guy Scott, a white man. Click here to read my first blog about his coming to power.

Like similar situations in democracies throughout the modern era, Scott as Vice President was a know-nothing, powerless figurehead who accompanied international missions mostly for needed amusement. George Bush refused to believe he was an official when a Zambian delegation visited the White House.

As Acting President he normally has no more power than an Acting Anything, which as we all well know in politics or business is a stand-in for the real thing expected sometime soon.

And so it seemed with Scott. Until last week. Here’s how that changed:

“… suddenly there was an announcement on national television that, Acting President, Guy Scott had dismissed PF Secretary General, Edgar Lungu from his position…[and]… replaced Lungu with Chipili Member of Parliament, Davies Mwila.

“The announcement was greeted with spontaneous riots and protests … and a thick nationwide atmosphere of disaffection.

The chess game that is always African politics is seen as some simply as Scott’s attempt to keep his opponents out of contention, the most important of which is the late president’s son.

But I think he’s setting himself up as a compromise candidate. He’s stoking the flames to become the hero who puts out the fire.

How does this parallel with Zimbabwe?

A once little known fact that has received wide attention recently is that Scott is actually a friend and vital supporter of the Zimbabwean dictator, Robert Mugabe, who among all of his most vicious detractors was hated most by the white farmer he displaced.

Mugabe is clearly on the descent, certainly physically but I think at last politically. When your wife challenges you in public, beware.

But if Scott prevails, then so might Mugabe’s dreams for succession?

Would you ever have thought the survival of the black demon Mugabe depended upon a once little known white man next door?