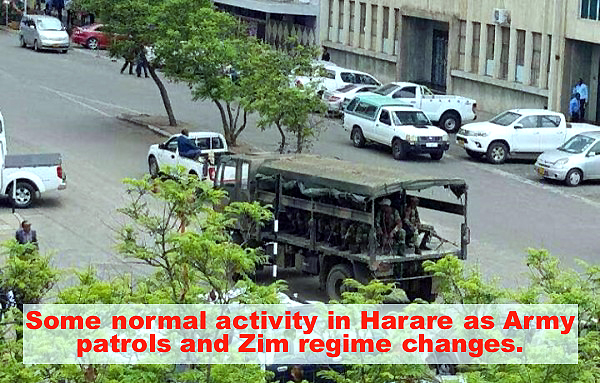 Events are moving quickly in Zimbabwe as the regime changes.

The Army is control. A credible news source, ZimNews, confirms that the President’s wife, Grace Mugabe, despised by the Army and the focal point of the coup, has fled to Namibia.

Emerson Mnangagwa, the vice president “deposed” by Grace several weeks ago, has slipped back into the country and will likely assume power. The 93-year old dictator, Robert Mugabe, is expected to address the country later tonight or tomorrow.

It’s been a long time coming. Now that Mugabe has been deposed, what next?

As the sun sets after one full day of Mugabe not in power, it appears that the feared civil war has not yet developed. That war would be a conflict between the police and the Army. The police and the intelligence service support Grace Mugabe. The Army and most of the rest of the government support Emerson Mnangagwa.

Some reports suggest that a coalition government will form that will include Morgan Tsvangirai as vice president. Tsvangirai is an ailing, perennial opposition leader who has lived almost as much of his life in jail as out and who had been discarded by the country’s militant youth earlier this year.

Zimbabwe has been on economic life support for decades. Normal economic statistics are laughable if unbelievable. Were it not for the near ridiculous levels of direct aid from South Africa, the country would not exist.

South Africa pours so much aid into Zimbabwe to stem the tide of migration into South Africa. There are currently 4 million Zimbabweans who have fled their country living in South Africa. That’s about a quarter of the remaining population inside the country.

If civil war is avoided most outsiders will consider that a positive outcome. But right now there is little indication that a month or two or a year down the road, that the lives of Zimbabweans will have changed very much. It will be one dictator for another.