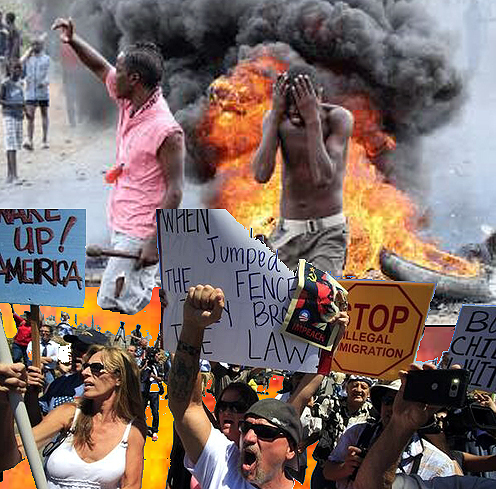 “These are dangerous times. Everyone in the city is scared. The sun is about to go down and we fear that there will be a lot more killing and looting tonight. We don’t know what will happen tomorrow.”

The above was written last week by a Congolese in Durban, South Africa, following violent clashes between local Zulu and what the Zulu king called “lice,” the many foreign African residents in the area.

Although actual protests and violence have ebbed, masses of immigrants are leaving South Africa for fear it will start up, again.

“Leave or die,” is how an African immigrant recently characterized his situation.

President Jacob Zuma canceled a foreign trip to “mourn” the victims, the numbers of which will not be published by police for some time but which we can presume are in the thousands.

It is, of course, not just happening in South Africa. Horribly violent youth have run many of Kenya’s long-time Somali residents out of Eastleigh, Nairobi, ostensibly in retribution for al-Shabaab’s terrorists attacks on the country but in reality because the community had engineered such prosperity in Kenya’s highly competitive lower economies.

Xenophobia is front and center in American politics, today, ever since an extraordinarily rational “Dream Act” that would have dealt with illegal immigration was blocked by Congressional xenophobes.

“Xenophobia cannot be divorced from the economic life of the masses,” writes a spokesman for the Socialist Party of Great Britain, which is hardly news yet seems to be forgotten each time mass protests like these die down.

South Africa is filled with extremely articulate and imaginative social thinkers, and there is a growing consensus among them that the South African violence represents the beginning of something unordinary and lasting.

“South Africa is a weak link in the global capitalist chain. If the chain breaks, it will do so at its weakest links,” writes Jane Duncan, a professor at the University of Johannesburg.

She cites the Occupy Movement and the Arab Spring as run-ups to the current xenophobic violence throughout the world. Those movements based on economy and democracy don’t have the self-sustaining power that xenophobia based on race, has.

So if Prof. Duncan is right, and the mendacious racism inherent in us all eventually breaks capitalism, then what?

The “then what?” is the reason it won’t happen, because there is yet no alternative to global capitalism.

“There is … no social force that has the capacity to subordinate capital to society,” another great South African thinker, Richard Pithouse wrote yesterday. He concludes:

“If we are to avoid a future that is exclusionary and violent… we are going to have to build new social forces.”

Anybody out there have a suggestion?