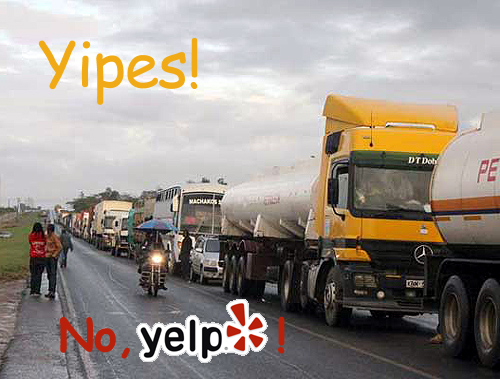 Bribing is a universal, world-wide phenomenon … sometimes called tipping. Africans have been unfairly cited by westerners all my life for bribing while it’s actually they who bribe ten times more each day than an African ever could.

We sugarcoat a lot by calling it tipping: Journeymen’s gifts at Christmas, an apple for the teacher, flowers on Secretary’s Day, or how about those popcorn baskets to truculent vendors at the end of the year or Godiva candies to past clients?

“Expressing our thanks,” replaces decent pay and benefits, or put another way, ensures there isn’t decent pay or benefits.

Social media powered by cell phones is getting rid of bribery … and tipping … in two ways. In Nairobi as in New York, Uber and Yelp and a dozen other media sites are bringing sanity back into service, while mass demonstrations are sealing the deal.

Big tippers get cabs in Manhattan. I spoke to a cabbie recently in Brooklyn who said he can spot a big tipper across the Hudson. Their jacket is unbuttoned. They’re looking uptown even if they want to cut a hard right just ahead and go downtown. They step out into the traffic lanes. He said sometimes they even wave dollar bills in the air.

Same in Dar-es-Salaam or Lusaka. Look rich, ooze currency, and you’ll get a better deal in the end. At least until … Uber.

No charade. No cash? To comply with the reality that a lot of Africans don’t own credit cards, Uber now takes cash there! But… no tip! Often, no wait.

Big restaurant tippers tend to be loyal customers. Tipping levels often were the best rating restaurants had … at least as far as the owners were concerned. No more. TripAdvisor be damned. Looking for the best grub in Joburg? Go to yelp.

In Kenya they’re falling all over themselves to get the Yelp franchise… stay tuned.

There is no question that this is grass roots change and that the cell phone facilitates it. You can’t really optimize either Uber or Yelp without a cell phone at the time you need their advice and service.

But cell phones are working from the top, too.

Kenyan truckers are among the best paid, best educated and roughest individuals on earth. They often speak softly but could crush you with their thumb. They have to be this way in order to bring food into war zones or plastic pipe into a desert without gas stations for 300 miles.

About the only thing that can disrupt a Kenyan trucker is … Kenyan police.

Kenyan police are generally fatter and less muscular, so in a brawl they’d lose. But they have power and saw horses that stop traffic. Ostensibly this is to check the safety of the vehicles: the tires, mufflers, etc. In reality it’s the way they get paid.

So to start the week in Kenya, today, thanks to Kenyans’ massive mobile phone networks, the entire country is coming to a halt as truckers turn off the engine on major highways.

The actual demonstration was prompted not by police bribes, but by the deaths of 37 truckers carrying cargo into troubled South Sudan. Truckers want Kenyan military escorts.

But they also want the end of road-block taxes.

So happy start of the week, Kenya! Make sure your phone is charged!