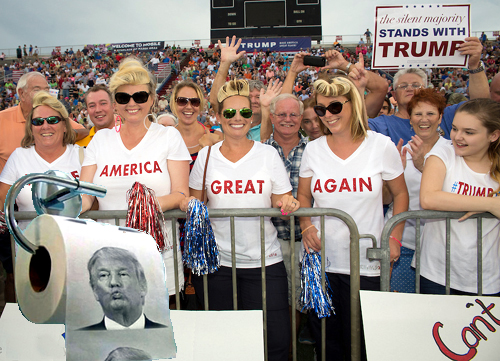 Increasingly worried by Trump, Africans are beginning to explain his errant behavior in terms of all of America, not just one crazy individual.

“We thank madman Trump,” writes Nairobi journalist Charles Obbo, editor of the influential Mail & Guardian. “He has opened the eyes of many.”

What Obbo and others are arguing is that Trump is not just … Trump, but an embodiment of America.

“He has millions of passionate followers… If Trump were an African politician, the international community would be threatening him with the International Criminal Court. The national integrity commission would be investigating him for hate speech.

“But in the US, the leader of the free world, he has cowed many. Some people, even very rich ones, are afraid of him and speak of the real estate tycoon anonymously.”

Obbo concludes: “Trump is beginning to suggest to us that what we see in the West is … the acquiescence of the public” to his madness.

Trump has been particularly hard on Kenya. Last fall in Iowa he called the Kenyan Beijing Olympic winners “cheats and con-men.”

When Kenyan president Kenyatta went to Paris to negotiate the climate deal, Trump claimed the president’s main purpose in going was to shop at Paris’ malls.

He so infuriated Kenyans that they created the #SomeoneTellTrump hashtag, and one of Kenya’s most successful businessmen is currently marketing toilet paper with Trump’s photograph on it.

It’s hardly only the Kenyans who are worried.

“So it is time to start thinking the unthinkable,” a South African journalist writes from Washington. “IT IS now entirely conceivable that Donald Trump will be the US’s next president.”

Obbo and others worry that someone like Trump is completely capable of ignoring all the institutions of democracy intended to check the crazy.

“The idea that institutions in developed countries work to prevent dictators from abusing power and becoming dictators might be a lie.”

Why do they think this way?

Because hardly 6 months ago the country’s most astute analysts broke into hysterical laughter on a Sunday TV talk show when a Congressman from Minnesota suggested Trump would be the Republican candidate.

For my entire life time The West purported to know what was best for Africa. Is that remotely possible when The West clearly doesn’t even know what’s best for itself?