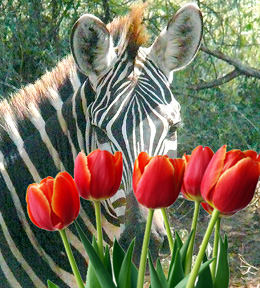 Or both? Animals are being frantically transported out of the Kenyan cut flower farms back into Amboseli National Park.. pretty much under the radar.

Wednesday, the Kenyan Wildlife Service (KWS) began a massive relocation of nearly 7,000 animals into Amboseli National Park. KWS has issued no press reports on the move and there are growing suspicions that it may be haphazard and poorly managed.

According to Simon N’Donga of Nairobi’s FM Capital Radio, the animals are being trucked from the Great Lakes area back to Amboseli. Thousands of herbivores had fled Amboseli during the last dry spell, and this would have been a decent place for them to have fled.

It’s where Kenya’s cut flowers are grown for export.

Last August I watched dozens of zebra, wildebeest and giraffe lining up on the edge of the dangerous Nairobi/Mombasa highway, frantically trying to leave the areas south of Nairobi where the drought was serious. Similar reports came from the Nairobi/Arusha highway.

All headed to the petunias.

The rains have returned big time and most of the country’s wilderness areas are very healthy, if too soaked. Likely the animals would return on their own, eventually.

But there are growing complaints in Kenyan society of the costs of wild animals in your corn patch and elephants in your church. There are also concerns that tourists will abandon the country for Tanzania if the country’s national parks don’t put on their Sunday Best for the upcoming season.

Capital FM Radio (I believe one of Kenya’s best investigative news sources) quoted a KWS senior scientist, Charles Musyoki, justifying the lightning fast operation “to make sure that Amboseli as an eco-system does not collapse.”

Seven thousand kicking zebra and blarting wildebeest is a huge number of animals to move. We’re talking about thousands of trucks. And probably not well insulated or padded. Certainly not your everyday wild animal-moving truck.

Capital FM said that a single helicopter was being used to herd the animals into 18-wheelers. The journey to Amboseli from Naivasha can take about 12 hours by truck. (Note that the Maasai Mara is only about 3 hours away from this area.)

When asked where the funds were coming from, Musyoki suggested it was directly from the Ministry of Finance, Kenya’s Treasury Department.

“We are actually doing this in the interests of Kenyans because Amboseli is one of the key protected areas in this country that generates a lot of income for the public,” Musyoki said.

The last reliable figures out of Kenya were in 2006 before the political turbulence of the 2007 election. Tourism was then Kenya’s largest foreign exchange earner, generating about $803 million, followed closely by cut flowers (then tea and coffee).

One out of every three flowers purchased in France, the Netherlands and Belgium comes from Kenya.

Almost all Kenya’s cut flowers come from the great lakes region, the area from which the zebra and wildebeest are now being taken.

If you hate deer in your rose garden….

KWS said the project will cost about $12-13 million. That’s not very much for 7000 animals. Earlier this year, KWS was relocating elephants from the coast into Tsavo at a cost of about $14,000 per elephant.

Forgive my natural cynicism which may have impeded my careful analysis of this, but it’s happening so quickly!

Kenya needs the cut flower industry. Kenya and all of us wishing to save the planet need Amboseli. So get those beasties out of my flower patch quick?!

Amboseli is Kenya’s third-most visited park (after the Mara and Nakuru), but one of its most fragile. It is a very unusual giant soda lake sitting under mighty Mt. Kilimanjaro, pumped to life by underground rivers off Kili that create a series of swamps and wetlands.

The herbivore population of zebra and wildebeest eat good old crab grass, not lotus flowers or swamp grass. They have always moved in and out of the park with erratic rains, and they have never constituted as important a part of the ecosystem as they do in the Mara, for example, a great grassland park.

That doesn’t mean they aren’t important; I just wonder how advisable it is to begin to control natural animal migrations with 18-wheelers that normally haul iron pipes and helicopters that have a shaky safety record in Kenya.