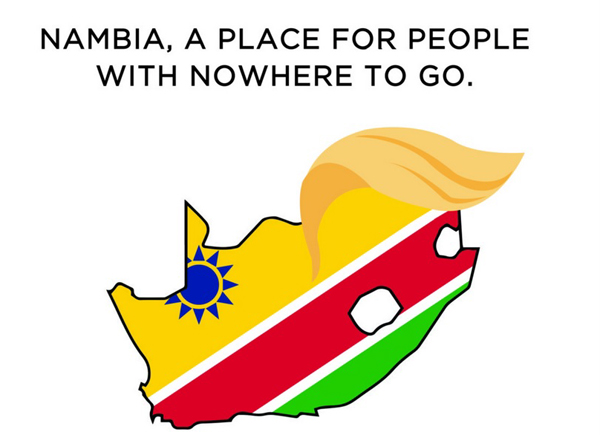 More and more fireworks followed the sunsets around the world until the Trump administration corrected the misspelling or conflation or whatever, and Nambia ceased to exist in the official record. It was the briefest country ever to exist on earth.

It’s not uncommon for Americans to conflate multiple African countries. It is quite uncommon that conflation makes it onto a prepared document. It’s unheard of these are then actually delivered by a Head of State.

The African press mostly left Trump’s blunder to the gladiators on Twitter, and boy did Twitter explode #Nambia. “Forget birth certificates. We need a DNA sample to prove he’s human,” tweeted a Brit.

Yes, we know that. But what we experts on Africa learned is that there’s no one in the Trump administration who knows anything more about Africa than that pitifully “prepared” speech delivered in front of virtually every important African leader on earth.

And that does matter. And there was much more horrific policy in that speech that was not misspelled.

The African press clobbered Trump for his remarks about “friends going to Africa to get rich”. That was cogent enough to trigger innumerable reminders of how African has been raped, from the slave trade through the colonial era.

Any businessman who achieves success in Africa through hard work and entrepreneurial endeavor – rather than bluster, blunder and mafia connections – has the sensitivity to tiptoe around Africa’s merciless history of exploitation. Tippu Tip and King Leopold preceded Donald Trump as the Grand Master of Africa’s Klu Klux Klan.

So what have we learned from this disgusting moment in history?

We’ve confirmed that Trump is a dupe. His brain doesn’t analyze or check anything. We’ve learned that probably everything he does is simple regurgitation of baby pablum. The terror resides with the nannies.

The feeders of Africa stuff are apparently dumb, disinterested or probably uncaring. Trump’s performance with regards to Africa as capped last night in that speech demonstrates no interest or knowledge of Africa whatever. Ok, that could be a blessing in disguise.

The pablum about Russia started long ago and it continues. Russia’s interests are laser sharp; it doesn’t care about Africa, either, and there’s the connection.

The nannies feeding pablum to Trump on these issues are deadly. They have advanced degrees in counter-espionage, revolution and mayhem, and hundreds of Ph.D candidates are now meticulously constructing a Machiavellian world out of the Trump fiasco.

Soon we’ll find out who these feeders are.