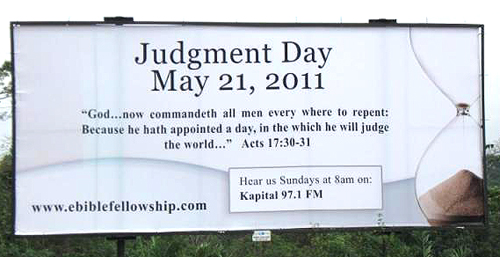 American religious fanatics are in East Africa announcing the end of the world and that the Kenyan draft constitution is blasphemous. What’s wrong? Not enough to do at home?

There’s no better object lesson on the futility of debate in America, today, than the stance taken by religious extremists. You can’t argue something that’s a lie except by calling it a lie, and that ends the discourse.

The result simply divides those listening into those who believe the lie and those who are calling out the lie.

And now these intellectually bereft righties have opened up a new battle front in East Africa. While I doubt it will work, their success in East Africa could be catastrophic. Several American religious groups are funding the “No Campaign” against Kenya’s Draft Constitution.

In July the Kenyan population votes on a referendum for a new constitution. The process of creating this draft constitution has been much more laborious and contentious than Obama’s health care legislation, but it represents a fabulous consensus among Kenya’s very fractured politic.

All the sane governments of the world are praising Kenya and the process that created the draft. The U.S. is pouring in considerable funds to help publish the draft and distribute it among the Kenyan population.

It’s a very fair constitution. Like all big legislation (and this is the biggest) it will be modified and reworked with time. But as a start it’s wonderful and should put an end to the potential for violence in the next election.

A powerful coalition of Kenyan churches opposes the draft and is campaigning for a “No” vote, which will throw the country into turmoil. Their justification? The draft constitution allows abortion.

Article 26 empowers doctors to end a pregnancy if it endangers a woman’s life.

Friday, Jordan Sekulow, head of Pat Robertson’s Center for Law & Justice, told the Associated Press that the draft constitution “..opens the door to abortion on demand.”

(“Tens of thousands of dollars” have already reached Kenya according to Sekulow’s blog on his site. In addition thousands of brochures printed by New York’s National Right-to-Life Committee are today being circulated in Nairobi.)

The American Center for Law and Justice (ACLJ) is a non-governmental public interest law firm founded in 1990 by the controversial televangelist Pat Robertson well-known for claiming that the Haitian earthquake was because the Haitians made a pact with the devil.

ACLJ gets its word out in Kenya particularly through the Christian Broadcast Network, which spends millions to achieve prime broadcast space throughout Africa.

I’ve often wondered why Christian fanatics spend so much energy in Africa. Consider the Electronic Bible Fellowship located in Sharon Hill, Pennsylvania. Their most recent campaign is to alert the world that it is ending on May 21, 2011. Their technique is by erecting billboards. Here is the list of where their seven billboards are located:

In the U.S. – where they live, or at least where they live until May 21 next year – they only use “moving” billboards – that is, signs on automobiles and RVs.

My brain is just too strained trying to figure this one out. Why do American religious fanatics do crazy things in Africa? I know there’s a reason.

And the best answer I can give right now is in Swahili. Sorry. But really, you don’t have to understand Swahili to laugh at this great Tanzanian comedian and his TV clip about the Dar billboard which eBible erected over a busy bus and matatu station in the center of Dar. Pull the timer button to just over 3 minutes to get to the segment where he “interviews” distraught Dar citizens who work under the billboard.